What to Expect When You’re Electing

Interesting data on S&P500 returns during the last two months of a presidential election year.

We looked at the last fifteen presidential elections beginning with the 1952 election of President Eisenhower.   With the exception of the swan elections of 2008, which took place during the financial collapse, and the contested of election of 2000, stocks have behaved very well in the last two months of the year.

The table below also shows that six presidents won reelection and three lost.  During the years when an incumbent won reelection, the S&P500 returned on average 3.5 percent and 5.0 percent when the challenger won.

Only one in six elections did the incumbent party win the White House when an incumbent president was not in the race.  Nine Republicans and six Democrats have won presidential elections since 1952 with the S&P500 performing fairly similar for both parties.

Given how close this election appears to be there is tail risk of a contested election, which would collide with the fiscal cliff resulting in a disaster for U.S. stocks, in our opinion.  That risk remains until the uncertainty is removed when polls close on November 6th.

We maintain the view that stocks rip higher with a decisive Romney victory, especially given the conventional wisdom (Intrade) is that the President wins reelection.   Not a political statement and history, as reflected in the table below,  does confirm our view — 5 percent average return for the S&P500 when the challenger defeats an incumbent president.   Given no Black Swans, of course! 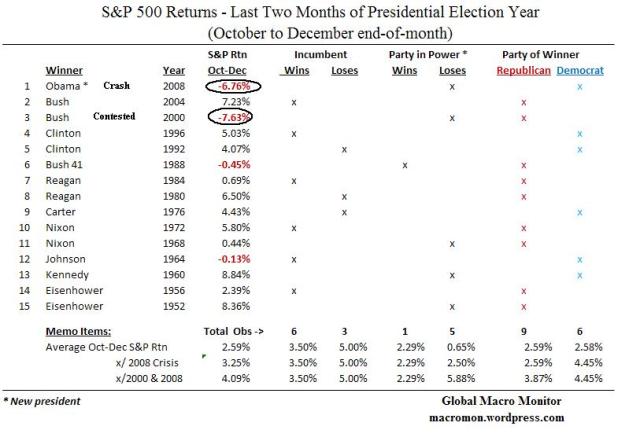 1 Response to What to Expect When You’re Electing