December, the overall best month for stock performance, isn’t supposed to start like this!

The S&P500 opened almost at its high of the day, traded through the 50-day moving average, got spanked  and commenced to sell off the rest of the day.  The market did respond positively after Speaker Boehner’s fiscal cliff counter but couldn’t hold the bid.  The President took to twitter to drum up support for his negotiating position.

The Administration and House are still far apart.  The ISM also came in very ugly.

The price action in all the indicators listed in the table confirm cliff fears are starting to grow.  Whether it’s not coming to an agreement, or the realization that austerity is just beginning,  today’s price action was concerning.

The S&P500 (SPY) was down 0.5 percent; consumer discretionary down 0.53 percent; and defense off over 1 percent.   The VIX moved above its 50-day moving average, the dollar was down, bonds, down and gold up a smidgen.

Some ugly reversals in MoMo land, especially the Facebook.

hey guys - this is barack. ready to answer your questions on fiscal cliff & #my2k. Let's get started. -bo

Gotta go. Thx. Keep pressure on Congress. Call, email, tweet your Member & tell them what 2k means to you. Lets get it done. #my2k -bo

What would a real fiscal cliff panic look like?

Stocks down hard;  Russell 2000 down harder;  consumer discretionary down hard;  gold up;  dollar down;  VIX spiking;  and defense stocks in the tank.

Bonds?   Tough to extract a clear signal with the Fed’s financial repression, but, initially,  the cowboys would most likely be in buying on recession fears and increased worries about going over the cliff. 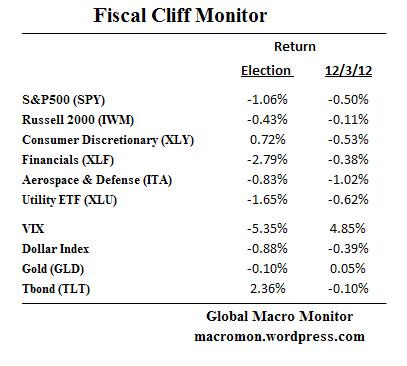 (click here if picture and table are not observable)