Leave it to the pols to ruin Christmas.   Now it’s either a purely Democratic cliff bill or nuttin’, honey.    Good luck passing the debt ceiling.

The House Republican Conference turned its back on Speaker John Boehner Thursday, forcing GOP leadership to abandon its plan to extend Bush-era tax breaks for income under $1 million.

After a full day of heavy arm-twisting, House Republican leaders were unable to cobble together enough support from 217 of their 241 members for Boehner’s (R-Ohio) “Plan B” proposal, even after Majority Leader Eric Cantor (R-Va.) assured its passage. Democrats vowed not to support the measure.

Now the market gets to vote.  Looks like the “market whip” is going to have to soften up the pols up a bit and herd some cats to get a deal done.

S&P500 e-minis are doing the Mayan Swan Dive in Globex.  Maybe the world does end for the levered longs tomorrow. 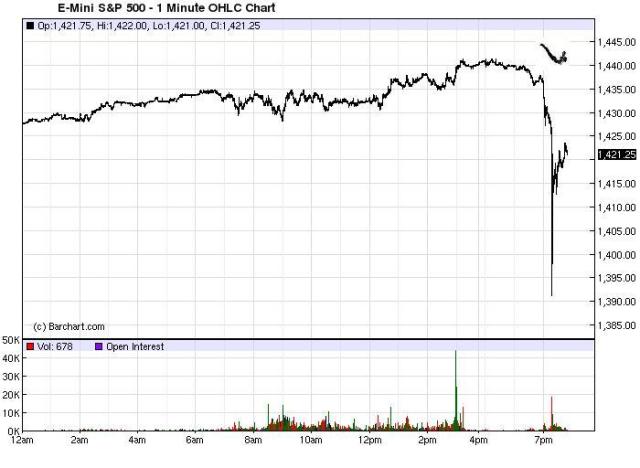 This entry was posted in Fiscal Cliff Monitor, Fiscal Policy and tagged Boehner, Fiscal Cliff, Plan B. Bookmark the permalink.