No Worries In The South Korean Markets

We have been writing a lot these days about how crude oil is not pricing any geopolitical risk of a very messy Middle East.  See here and here.

That’s nothing, however,  compared to the performance of the South Korean stock market and currency, year-to-date,  given the geopolitical risk of the many North Korean missile tests fired off in the first seven months of 2017 (see timeline below).    The KOSPI stock index is up 21 percent and the currency has strengthened a little over 7 1/2 percent against the dollar.

Oh, by the way,  Korea also impeached and removed their president earlier this year,  had a presidential election, and has also been put on a currency manipulation monitoring list by the US Treasury.

Although Korea has not been designated as a currency manipulator, the country continues to be on the US Treasury’s watch list. The Treasury Department’s semiannual report released in April said the country hits two of the three criteria to be considered an official currency manipulator. The Treasury said it was urging Korea to increase its exchange rate flexibility and that it will be closely monitoring its currency intervention practices. – The Korea Herald

Is this the definition of  “climbing a wall of worries”,  complacency,  or just a bullet proof bull market?   We vote for capital flows seeking emerging markets. 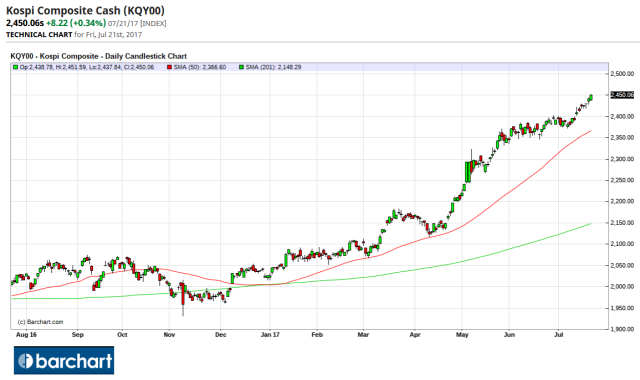 5 Responses to No Worries In The South Korean Markets