We had several requests after the close to update the JFK-Trump S&P analog given today’s ugly market.

The analog continues to track like a Raytheon tomahawk cruise missile, acting with the precision as if its  guided with the same Digital Scene Matching Area Correlation navigation system as the tomahawk.  Sorry for the military metaphor.

Today marked the 366th trading day since the November 8th election of President Trump, and both S&P’s are only 60 basis points apart in terms of their relative price performance.

What is more amazing is how they have tracked so closely on a timing basis since the correction in early February.    The Trump S&P made a swing high on Day 363 (last Friday) while the Kennedy made its swing high on Day 364.    As the chart illustrates,  the market turned down right when the analog indicated it would.

Time To Buckle Up

The analog also illustrates the market is about to get very hairy and scary over the next 40 trading days into late June.   The chart illustrates a further decline of around 23 percent is in store over the next few months.

Can’t say with certainty the analog is going to continue to track but,  hey, it is working like a champ so far.

Now something for the critics.

We posted this chart yesterday of the Trump-Reagan S&P analog. 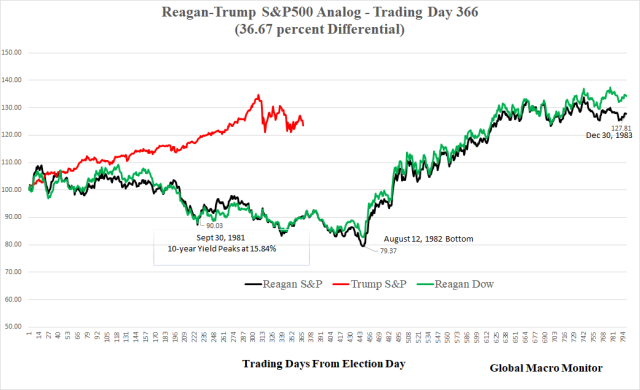 We have taken a lot of incoming from critics who argue that “if you overlay any two charts they will always appear correlated.”  Complete freaking nonsense!

It is true most financial and economic time series usually move in a positive upward trend, and the data are often nonstationary.  That is  by their very nature, they will move together in the same upward direction, mainly due to inflation.

We suspect that is where the critics derive their main argument.

Nor did we fit or tinker with dates to force the puzzle to fit.  The start day is election day, punto!

In 1929, the market peaked on September 3rd and fell 32 percent before Black Tuesday, which sliced another 11.7 percent off the stock market.  The stock market was thus already in a vicious bear market before the crash.  Furthermore, that market didn’t recover the September 1929 high until 1954!

Both these markets significantly differ in character from the 1962 bear market and the current corrective phase the S&P500 now finds itself in.

Today’s market has been very stubborn to the downside and is taking its time to take out the February 9th low.  In fact, today marked the 50th trading day since making the February low.

Extremely stubborn, just as the 1962 bear was, which took 20 days to take out the initial low, and almost 90 trading days from the December peak to before gathering some real downside momentum, which began in late April, right about now to be exact.

We may or may not be in a bear market and will stick with JFK analog as long it is working, and boy is it working.   Stay tuned.

Finally,  we love the rhymes of history.

Just as President Trump now is, President Kennedy was also consumed with negotiations with Korea on this very day in 1962.  Not with North Korea, however, but with South Korea and Japan.

He was pressing hard for an agreement between Japan and South Korea to resolve their long-standing grievances.

Check out the memo from JFK to his Secretary of State, Dean Rusk, dated April 24, 1962.

Please do us, and yourself,  a favor and take the thirty seconds to read it.  We will take it as your payment for our research.

It it written by President Kennedy and will provide you with a quick glimpse into his sharp intellect, and savvy political and diplomatic skills. 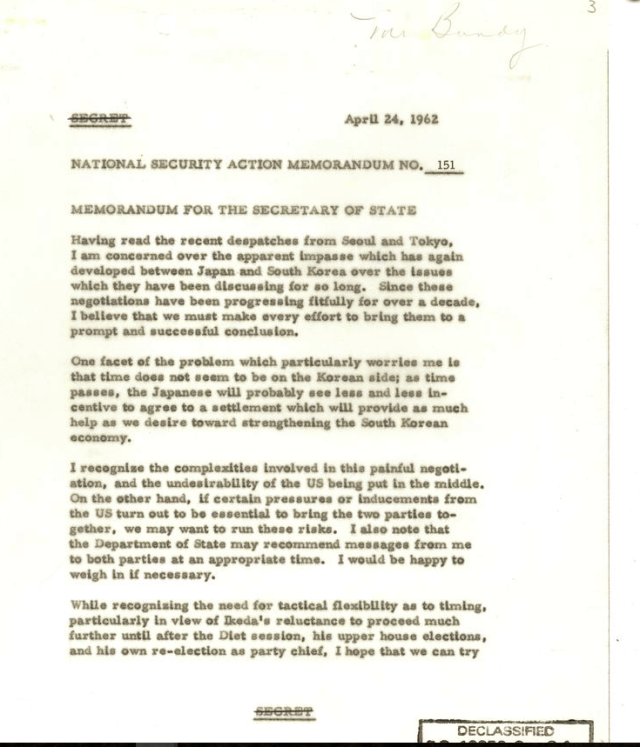 We hope President Trump is as knowledgeable, prepared, and savvy as JFK heading into the upcoming summit.  And if only he had Dean Rusk at his side.