After rallying 6.66 percent from the bear trap low last Monday to yesterday’s high of 2910.16,  the S&P is now consolidating that big move.  The ‘bots have mastered the art of the bear trap.   F**k wads!

The 50-day moving average held today, which is positive.   The 2900 level seems to be a big number and a key Fibo retracement of this recent 7.63 percent sell-off.  A close above 2900 greatly increases the odds the 2954.13 all-time high will be taken out.

Note, our target for the S&P was 3025 before the Big Dipper sell-off hits but began to doubt that especially after the threat of Mexican tariffs came onto the radar.  The market is conditioned to salivate when the Fed rings the bell of mo monetary stimulus and, as you can see in the table and matrix below, the market prices a higher and higher probability of a Fed rescue as each day passes.

We respect that and don’t fight it but are reducing risk as the market moves higher.  We believe we are in the late or extra innings of this bull market, valuations are at extremes and the tectonic geopolitical and economic plates, which have been the foundation of the secular bull market are rapidly shifting.

You have to feed the seals while they’re barking, folks. Trying to sell into a panic market with no bid is not fun and very unhealthy for your P&L. 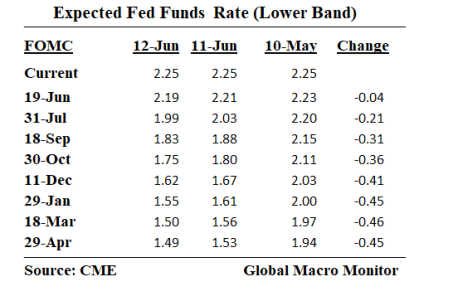