This post is dedicated to our very loved colleague and friend, Carol K., who has been bravely fighting a relapse of ovarian cancer.  She received the results today she is cancer-free.  She is a true warrior and we never had any doubt she would beat the beast.

Disclaimer:   The prediction markets are the worst forecaster except for all others.  Though they nailed the presidency, they were way off on many Senate seats.  For example, Sen. Susan Collins of Maine was only priced at around a 30% probability of being re-elected the day before election day.  Big Fail!

Markets are betting five out of the top six in the line of succession to the presidency are going to be from the XX chromosome set, and number three is an 87-year white male Republican with COVID, who, BTW,  we send out thoughts and prayers, and hope his fellow Republicans will begin to respect biology and start to rigorously adhere to wearing masks in public.

Times they are a-changin’.  Good for my three daughters.

Lael Brainard (born 1962, Hamburg, West Germany is an American economist and member of the U.S. Federal Reserve’s Board of Governors, where she serves as Administrative Governor and Chair of the Committees on Financial Stability, Federal Reserve Bank Affairs, Consumer and Community Affairs, and Payments, Clearing and Settlements. She previously served as the United States Under Secretary of the Treasury for International Affairs and as Counselor to the Secretary of the Treasury from 2009 to 2013 where she received the Alexander Hamilton Award for her service. She was a senior fellow at the Brookings Institution from 2001 to 2009 and Vice President and Director of the Global Economy and Development Program from 2006 to 2009.  She served as Deputy National Economic Adviser and Deputy Assistant to the President from 1998 to 2000.  She previously was a member of the faculty at the MIT Sloan School of Management and worked at McKinsey & Company  She was awarded the Harvard GSAS Centennial Medal and the New York Association of Business Economics William F. Butler Award in 2019.  – Wikipedia

GMM comments:   Shorting Mnuchin seems free money to us.  The people have spoken. LB born outside the U.S., which renders her, according to the Constituion, inelgible to assume the presidency.  We suspect she is from a miliatry family and would probably be an exception, as was John McCain, who was born in Panama, during his presidential run.

The constitution does not expressly define “natural born” nor has the Supreme Court ever ruled precisely upon its meaning. One can be a citizen while not being a “natural born” citizen if, for example, that person gained citizenship through the process of naturalization.  – Cornell Law

Susan Elizabeth Rice (born November 17, 1964) is an American diplomat, policy advisor, politician, former public official, philosopher and screenwriter who served as the 27th United States Ambassador to the United Nations from 2009 to 2013 and as the 24th United States National Security Advisor from 2013 to 2017.Rice was born in Washington, D.C., and attended Stanford University and New College at the University of Oxford, where she was a Rhodes Scholar and received a DPhil (PhD). She served on President Bill Clinton‘s National Security Council staff from 1993 to 1997 and was the Assistant Secretary of State for African Affairs at the State Department from 1997 to 2001. Appointed at age 32, Rice became the youngest person in U.S. history to serve as an Assistant Secretary of State. Rice’s tenure saw significant changes in U.S.–Africa policy, including the passage of the African Growth and Opportunity Act, support for democratic transitions in South Africa and Nigeria, and an increased U.S. focus on fighting HIV/AIDS. – Wikipedia 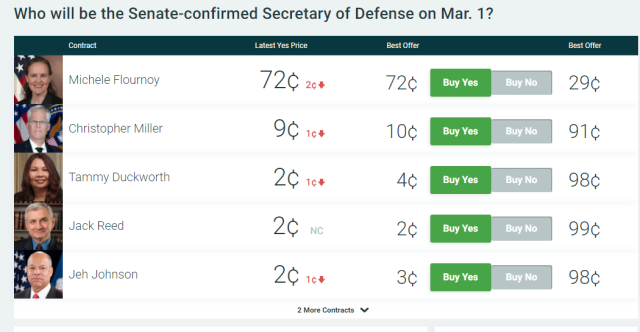 Michèle Angélique Flournoy (born December 14, 1960) is an American former government official who served as Deputy Assistant Secretary of Defense for Strategy under President Bill Clinton and Under Secretary of Defense for Policy under President Barack Obama, as well as a principal advisor to U.S. Secretaries of DefenseRobert Gates and Leon Panetta from February 2009 to February 2012. During her tenure in the Clinton administration, Flournoy was the principal author of the May 1997 Quadrennial Defense Review (QDR), which advocated the unilateral use of military power in defense of US interests.

While serving in the Obama administration, Flournoy crafted the administration’s policy of counter-insurgency in Afghanistanand helped persuade President Obama to intervene militarily in Libya.[3][4] When the U.S. Senate confirmed her nomination on February 9, 2009, she was at the time the highest-ranking woman at the Pentagon in the department’s history

In 2007, Flournoy co-founded the Center for a New American Security,[6] a for-profit Washington, D.C.-based think tank that specializes in U.S. national security issues. After leaving the Obama White House, Flournoy joined the Boston Consulting Group as a senior advisor, overseeing the development of $32 million in military contracts. In 2018, she joined the board of Booz Allen Hamilton, a publicly traded consulting firm with military contracts and cyber security expertise.[9] She is currently the co-founder and managing partner of WestExec Advisors, and a Senior Fellow at Harvard‘s Belfer Center for Science and International Affairs. – Wikipedia

Gordon Douglas Jones (born May 4, 1954) is an American attorney, former prosecutor and politician serving as the junior United States Senator from Alabama since 2018. A member of the Democratic Party, he was the United States Attorney for the Northern District of Alabama from 1997 to 2001.

Jones was born in Fairfield, Alabama, and is a graduate of the University of Alabama and Cumberland School of Law at Samford University. After law school, he worked as a congressional staffer and as a federal prosecutor before moving to private practice. In 1997, President Bill Clinton appointed Jones as U.S. Attorney for the Northern District of Alabama. Jones’s most prominent cases were the successful prosecution of two Ku Klux Klan members for the 1963 Birmingham church bombing that killed four African-American girls and the indictment of domestic terrorist Eric Rudolph. He returned to private practice at the conclusion of Clinton’s presidency in 2001.

Jones announced his candidacy for United States Senate in the 2017 special election following the resignation of Republican incumbent Jeff Sessions to become U.S. Attorney General. After winning the Democratic primary in August, he faced former Alabama Supreme Court Justice Roy Moore in the general election. Jones was considered a long-shot candidate in a deeply Republican state. A month before the election, Moore was alleged to have sexually assaulted and otherwise acted inappropriately with several females, including some who were minors at the time.[1] Jones won the special election by 22,000 votes, 50%–48%.

Jones is currently the only statewide elected Democrat in Alabama and the first Democrat to win statewide office since Lucy Baxley was elected President of the Alabama Public Service Commission in 2008. Democrats had not represented Alabama in the U.S. Senate since 1997, when Howell Heflin left office. Jones is considered a moderate Democrat who demonstrates a willingness to work with Republicans and split with his party on certain issues.

Jones ran for a full term in 2020, and lost to Republican nominee Tommy Tuberville. He is considered a leading contender for United States Attorney General in the Biden administration. – Wikipedia

GMM Comments:  This makes DJ a Saint, in our book:  Jones’s most prominent cases were the successful prosecution of two Ku Klux Klan members for the 1963 Birmingham church bombing that killed four African-American girls and the indictment of domestic terrorist Eric Rudolph.

This entry was posted in Politics, Uncategorized and tagged Biden Cabinet. Bookmark the permalink.