“According to the Tehran-based Mehr News Agency, Heydar Moslehi, Iran’s minister of intelligence, said that “enemy spy services” were responsible for Stuxnet, the sophisticated worm that has infected at least 30,000 Windows PCs in the country, including some at the Bushehr nuclear power plant.

The DEBKAfile, an intelligence and security news service, writes that Iran is seeking revenge for the Stuxnet cyber attack,

“Tehran is bent on military action to settle scores with Israel and the United States whom it suspects of planting the malignant Stuxnet cyber worm in the computer systems of its nuclear, military and strategic infrastructure, debkafile’s military and US sources report. The timeline of this attack revolves around the state visit to Lebanon President Mahmoud Ahmadinejad has scheduled for Oct. 13-14, during which he will tour the Israeli border. Preying heavily on Iran too are the personal sanctions the United States has just imposed on its top military brass and ministers.”

This is one issue – which could be the subject of a Tom Clancy novel – that has been flying under the market radar.   It could surface in October and may have partially influenced the 10% spike in crude prices over the past few weeks.   Our sense is the markets, and specifically crude oil, will begin to focus on a potential elevation of geopolitical risks,  especially given recent reports of imminent “Mumbai style” terror attacks in Europe.  We suggest you keep it on your radar. 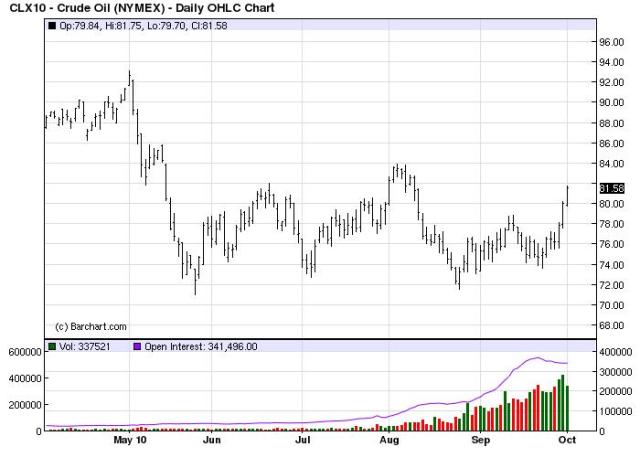