Wow!  This chart reprinted by The Atlantic brings flashbacks.

We recall showing the Robert Schiller chart to many of our friends warning of a massive bubble and potential economic collapse.  They wouldn’t hear any of it.  We luckily sold our ocean view house in late 2004/early 2005 and have been a happy renter every since.   Still too much hopium for a rebound in housing prices for a bottom, in our opinion.

The demand for housing is based primarily on the cost of the monthly mortgage payment, but interest rates have no where to go but up over the long term.   What does that say about the secular direction of home prices?   The boom that began in the early 1980’s coincided with interest rates in the high teens.

Maybe the Fed can generate another housing bubble, but the value of housing in a mature market should move with bond prices unless a large dislocation takes place such as the one we’re currently experiencing.

Best to focus on wealth creation by becoming more productive rather than levering up on real estate and hope it moves your way.   In today’s world that means reinventing yourself and becoming an entrepreneur. Much easier said than done, but what choice do most have? 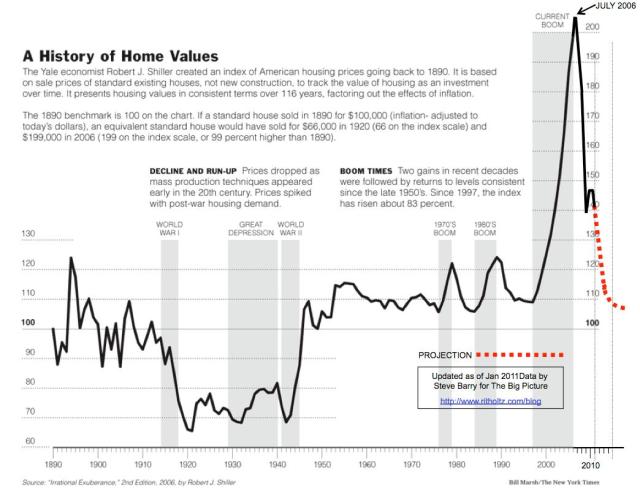 This entry was posted in Housing and tagged House prices. Bookmark the permalink.