The JPMorgan Global Manufacturing PMI™ broadly held its ground at 51.1 in February, little-changed from 51.3 in January, to signal an improvement in operating conditions for the third straight month. Levels of output, new orders and employment all moved higher…

The highest PMI output indices were posted by Denmark, South Africa, India and the US. Among the larger manufacturing nations, growth was registered in China, Japan, Germany and the UK.

The weakest performances were mainly seen at the
periphery of the euro area. The downturn in Greece took a marked turn for the worse, with production and new orders both falling at survey record rates. Italy and Spain also saw faster declines in output than one month ago. Meanwhile, output in Turkey fell back into contraction…

Cost inflationary pressures picked up sharply in February, with the rate of increase reaching a five-month peak. Part of the latest rise reflected higher oil prices and associated increases in the costs of by-products, energy and transport.

Developed markets were generally more exposed to these cost pressures than emerging markets. Rates of increase surged higher in the US, the Eurozone and the UK. India also saw a sharp increase in costs. 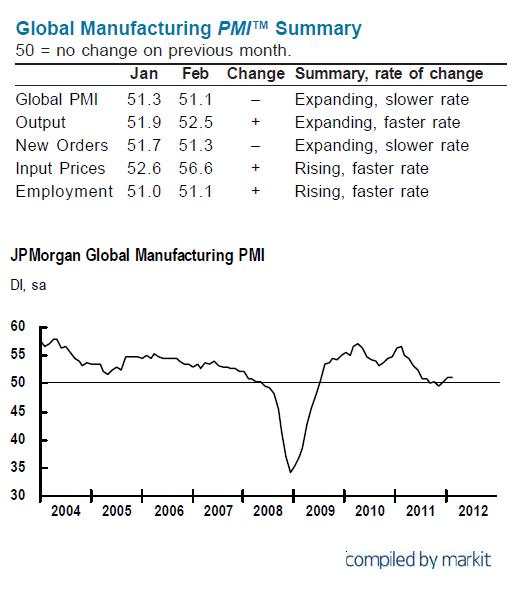 This entry was posted in Economics, Manufacturing and tagged Global PMI, JPM, Markit. Bookmark the permalink.