Note the destruction of construction jobs.  This is the one sector most sensitive to interest rates and should be leading the way in job creation with zero interest rate (ZIRP) monetary policy and sub 4 percent mortgages.   More later, but we believe (to be confirmed in later post)  there has been net zero construction jobs created since the jobs recovery started in March 2010 after losing over 2 million during the great recession.

Nonfarm payroll employment changed little in May (+69,000), and the unemployment rate was essentially unchanged at 8.2 percent, the U.S. Bureau of Labor Statistics reported today. Employment increased in health care, transportation and warehousing, and wholesale trade but declined in construction. Employment was little changed in most other major industries.

Both the number of unemployed persons (12.7 million) and the unemployment rate (8.2 percent)
changed little in May. 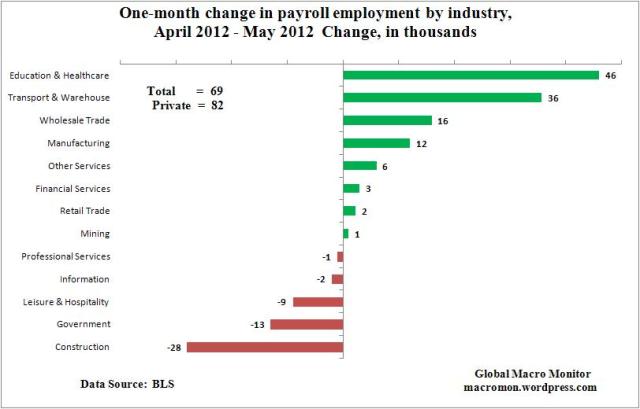 This entry was posted in Employment, US Releases and tagged Construction jobs, non-farm payrolls, U.S. umemployment. Bookmark the permalink.