CPI inflation in May turned negative on continued significantly lower energy costs. Meanwhile, the core rate held steady and moderately warm. The consumer price index fell 0.3 percent in May, following no change the month before. The consensus forecast was for a 0.2 percent decline. Excluding food and energy, the CPI gained 0.2 percent, compared to 0.2 percent in April. Analysts projected a 0.2 percent rise.

By major components, energy dropped a monthly 4.3 percent after falling 1.7 percent the prior month. Gasoline declined a sharp 6.8 percent, following a drop of 2.6 percent in April. Food prices were unchanged in May, following a 0.2 percent gain in April.

Within the core, the indexes contributing to the increase were largely the same ones as in April: shelter, medical care, used cars and trucks, apparel, airline fares, and new vehicles. The indexes for household furnishings and operations and for tobacco declined.

The obvious good news from today’s CPI report is that consumers are paying less at the gas pump, freeing up some money to spend elsewhere. Yesterday’s 0.2 percent decline in May retail sales turns slightly positive in real terms with the CPI dropping 0.3 percent. But within the Fed, there likely will be diverging opinions on inflation. Headline numbers are favorable but the core is stubbornly on the warm side. 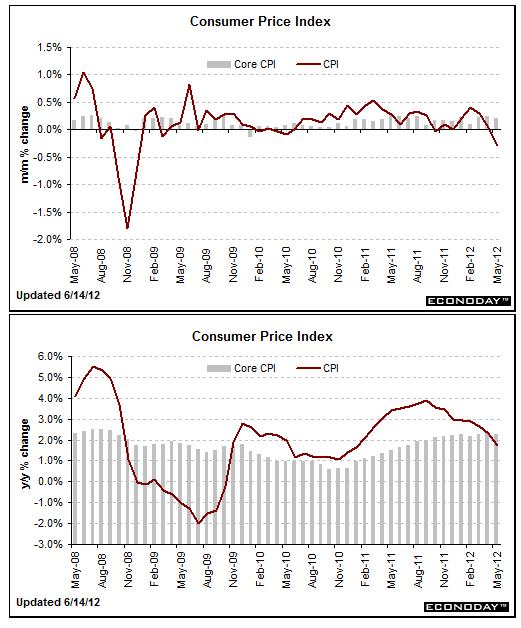 There’s no improvement in jobless claims which unfortunately does not point to any improvement for payroll growth or for the unemployment rate. Initial claims rose 6,000 in the June 9 week to a 386,000 level that is a noticeable 9,000 over the Econoday consensus. And the prior week is now at 380,000 which is 3,000 higher than the initial estimate. The four-week average is moving in the wrong direction, up three times in a row with a 3,500 gain to 382,000 in the latest week. This is slightly higher than the month-ago comparison which is a negative indication for the June employment report.

Continuing claims have been back and forth, down 33,000 in data for the June 2 week to 3.278 million. The four-week average is down slightly to a 3.282 million level that however is no better than the month-ago comparison. At 2.6 percent, the unemployment rate for insured workers has, in what is good news, been unchanged at a recovery low for the last three months.

This data isn’t going to trigger much optimism that the June employment report will be much better than the disappointing reports of May and April. The Labor Department reports nothing unusual in the data. 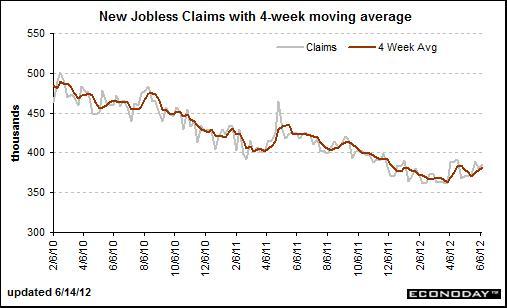 This entry was posted in Economics, US Releases and tagged CPI, Weekly Jobless Claims. Bookmark the permalink.