Speaking of the Irish….

Not only do we love Irish bands, we  owe much our heritage to the country.

We’re also proud our distant relatives (less so with Twitter, however)  are working hard to take one of the eyes out the European PIIGS.   The Irish were not only crucified with the bursting of their housing bubble,  but the population was also stuffed with the sins of their bankers.

The European Central Bank exposure in Ireland is above €130 BN, a quarter of its book, and now wants its money back.  In the article,  The ECB May Not Be The Friend It Seems, in Monday’s  Irish Times, John McMananus writes,

WHEN THE history of Ireland’s banking and fiscal collapse comes to be written, the role of the European Central Bank may well turn out to be the most controversial…

It is worth noting in this regard that Jean Claude Trichet rang Brian Lenihan over that fateful weekend in September 2008 to impress on him the importance of not letting any Irish bank fail. The obvious inference was that the ECB would play its part.

Now you understand the EU/IMF attempt to bailout the Spanish banking system without sinking the Spanish sovereign with the massive debt load similar to what the Irish had to assume.   Ireland was just too early in the game and a very unfortunate guinea pig in the EU’s learning-by-doing bailout policymaking.

Nevertheless, the country is doing something right as Ireland’s sovereign bond has been the best performer in the world over the past year.   The 10/9-year yield has fallen a stunning 1,072 basis points since July 2011.  They now yield lower than Italy and Spain. 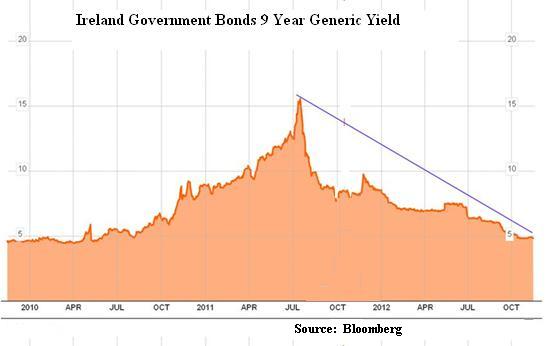 Though we suspect technicals has had something to do with the move, we’re not really studied enough on the Irish economy to comment on the fundamental reasons for this incredible performance.   We do suspect, however, at least, in part, it has do with their tough stance they took against the Germans and French to keep their corporate tax rate low relative to the rest of Europe     We posted in March 2011,

By the way,  thanks for giving us the beautiful gift of Andrea Corr — and the rest of the band, of course.  Breathless!

This entry was posted in PIIGS and tagged Andrea Corr, ECB, Ireland, The Corrs. Bookmark the permalink.