The butterfly effect is the concept that small causes can have large effects. Initially, it was used with weather prediction but later the term became a metaphor used in and out of science.

In chaos theory, the butterfly effect is the sensitive dependence on initial conditions in which a small change in one state of a deterministic nonlinear system can result in large differences in a later state. The name, coined by Edward Lorenz for the effect which had been known long before, is derived from the metaphorical example of the details of a tornado (exact time of formation, exact path taken) being influenced by minor perturbations such as the flapping of the wings of a distant butterfly several weeks earlier. Lorenz discovered the effect when he observed that runs of his weather model with initial condition data that was rounded in a seemingly inconsequential manner would fail to reproduce the results of runs with the unrounded initial condition data. A very small change in initial conditions had created a significantly different outcome.  — Wikipedia

On this day in history, June 28, 1914, the driver for Archduke Franz Ferdinand,  nephew of Emperor Franz Josef and heir to the Austro-Hungarian Empire,  made a wrong turn onto Franzjosefstrasse in Sarajevo.

Just hours earlier, Franz Ferdinand narrowly escaped assassination as a bomb bounced off  his car as he and his wife,  Sophie,  traveled from the local train station to the city’s civic city.   Rather than making the wrong turn onto Franz Josef  Street, the car was supposed to travel on the river expressway allowing for a higher speed ensuring the Archduke’s safety.

Yet, somehow, the driver made a fatal mistake and tuned onto Franz Josef Street.

The 19-year-old anarchist and Serbian nationalist, Gavrilo Princip, who was part of a small group who had traveled to Sarajevo to kill the Archduke,  and a cohort of the earlier bomb thrower, was on his way home thinking the plot had failed.   He stopped for a sandwich on Franz Josef Street.

Seeing the driver of the Archduke’s car trying to back up onto the river expressway, Princi seized the opportunity and fired into the car, shooting Franz Ferdinand and Sophie at point-blank range,  killing both.

That small wrong turn,  a minor perturbation to the initial conditions, or deviation from the original plan,  set off the chain events that led to World War I. 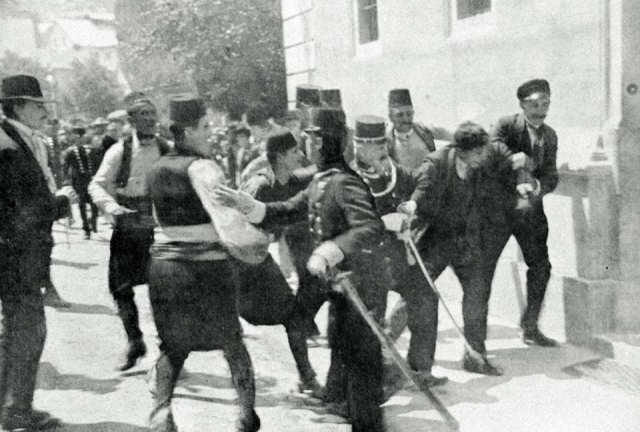 Stumbling Into The Great War
Fearing Russian support of Serbia, Franz Josef would not retaliate by invading Serbia unless he was assured he had the backing of Germany.   It is uncertain as to whether the Kaiser gave Franz Josef Germany’s unequivocal support.   Russia, fearing Germany would intervene, mobilized its troops forcing Germany’s hand.

The great European powers thus stumbled into a war they didn’t want through complicated entanglements and alliances, and miscalculation.  Russia backing Serbia;  France aligned with Russia,  Germany backing the Austro-Hungarian Empire;  and Britian, who really didn’t have a dog in the fight except her economic interests, aligned with France and Russia.

Later the U.S. would enter the war due to Germany’s unrestricted submarine warfare threatening American merchant ships and the Kaiser floating the idea of an alliance with Mexico in the famous Zimmerman Telegram, which was intercepted by the British.

Of course, some will argue that Great War in Europe was inevitable

The great Prussian statesman Otto von Bismarck, the man most responsible for the unification of Germany in 1871, was quoted as saying at the end of his life that “One day the great European War will come out of some damned foolish thing in the Balkans.” It went as he predicted.  – History.com

Nevertheless,  maybe the course of history would have been different if not for that wrong turn on June 28, 1914, which created the humongous butterfly effect, which we still experience the consequences this very day.

The botched Treaty of Versailles  sowed the seeds the for World II.  The War contributed to the Russian revolution and Cold War.  The redrawing of borders in the Middle East after the War created the conditions for the instability and breakdown to tribalism the region experiences today.

A map marked with crude chinagraph-pencil in the second decade of the 20th Century shows the ambition – and folly – of the 100-year old British-French plan that helped create the modern-day Middle East.

Straight lines make uncomplicated borders. Most probably that was the reason why most of the lines that Mark Sykes, representing the British government, and Francois Georges-Picot, from the French government, agreed upon in 1916 were straight ones.  — BBC News

If Franz Ferdinand had not been murdered on this day in history,  that conflict between the Serbs and the Austro-Hungarian Empire may have been contained to just the Balkans.   Maybe.

The butterfly effect.  Think how many small events, decisions, mistakes, one small turn, or “minor perturbations” in plans have had enormous consequences in your own personal life.

This entry was posted in Economics, Geopolitical, Uncategorized and tagged Butterfly Effect, Franz Ferdinand, World War I. Bookmark the permalink.