Europe Has A Big Problem

Mr Mattarella asked Mr Cottarelli to assemble a technocratic cabinet as Italian bonds and equities were hit by a sell-off in reaction to the rising political uncertainty and a mounting constitutional crisis.

Mr Cottarelli accepted the mandate and attempted to deliver a soothing message to markets, although he is widely considered unlikely to win a vote of confidence, which would trigger fresh elections by the autumn.

…But the message failed to register with investors amid the confrontation between the populists and the old political order. The country’s debt yields ratcheted up to levels not seen since the aftermath of the eurozone debt crisis as Italian government bonds came under heavy selling pressure.

The FTSE MIB index was also hit hard, led by bank stocks. In mid-afternoon trading in Milan, Italy’s main stock barometer was down 2.5 per cent, leaving the loss for the month of May at nearly 9 per cent and wiping out all against this calendar year.  – FT, May 29

More political uncertainty and bigger populist blowback.  The markets are not buying the appointment of an IMF technocrat as it did during 2011 European debt crisis with Mario Monti, seeing through it an impetus for greater political blowback.

Italy is the 4th largest sovereign debtor government in the world.   The risk of contagion to the rest of the world is more likely than not, in our opinion.   It has already begun in Europe as sovereign spreads are starting to correlate.  Today’s spread widening: Italy + 29 bps;  Spain +12 bps;  Portugal +19 bps;, and Greece +15 bps.

A massive spread blowout today will also be more painful and do more damage than it did in 2011 due to how lower interest rates have affected the convexity of the bond market.  That is given an increase in yields; bond prices are hit much harder.    The New York Fed has written about the “convexity event risks” in the bond markets.

The pain will have to get much worse in Italy to put the fear of  ITALEXIT into the country’s realpolitik.

That said, Italy was still able to auction debt today.

Italy placed the top planned amount of 1.75 billion euros ($2 billion) of a zero-coupon bond maturing in March 2020 at a gross 0.35 percent yield, up from a negative yield of minus 0.275 at the previous auction in late April…

…At Monday’s auction, Italy also placed a combined 1.25 billion euros of two inflation-linked bonds maturing in May 2022 and May 2028, meeting the top of its targeted issuance range.

The May 2022 BTPei bond fetched a gross negative yield of minus 0.05 percent. It had last been sold in February at minus 0.41 percent.

The Treasury will sell six-month bills on Tuesday and up to 6 billion euros in bonds on Wednesday, including 5- and 10-year nominal bonds as well as a seven-year floating-rate one. –  Reuters

We are not close enough to the auctions to know whether they had official support.  For example,  the Fed took down 20 percent of the latest U.S. 10-year note auction as it rolled over some of its maturing Treasuries.

We need to confirm on whether or how the ECB directly participates in bond auctions.  The posted auction results are not as transparent as in the U.S. (see next link).  Nevertheless, the Italian 10-year went off with a 2.23 bid-to-cover today.

There doesn’t seem like funding stress quite yet, but an Italian 2-year at 0.35 percent with a depreciating Euro is a juicy target for the bond market vigilantes who want to test Super Mario and whether eMac is ready to lead Europe

Furthermore,  the Trump administration’s  “save Europe” policy in the event of a crisis will likely be much different from the pro-EU Obama administration during the 2011 crisis.  Philosophically, President Trump is closer to the populists than he is to Macron.

The shorts have already stepped up their positions against Italy’s bond market.

Italians bond yields should not be this low on a fundamental basis, yet they are, and it is the result of the Draghi put.   We wrote the following in our May 9th post,  Italy’s North-South Economic Divide,

The Italian 10-year government bond is 112 bps through the U.S. 10-year note yield, and the country doesn’t have an independent central bank!   Moreover, the Germans are coming to town at the ECB very soon.   How is that for pricing risk?

Covered interest rate parity?   Doubt it.  Just another example of how QE has FUBARed risk pricing. and how the euro markets are repricing individual sovereign risk to European sovereign risk, again.   – GMM, May 9

Moreover, the political dynamics in Germany are going to complicate another ECB bailout of Italy if one is needed.

It’s deja vu all over again.

Also watch Spain’s vote of no confidence on Friday.

Seatbelts <>.  EUROPE HAS A BIG PROBLEM 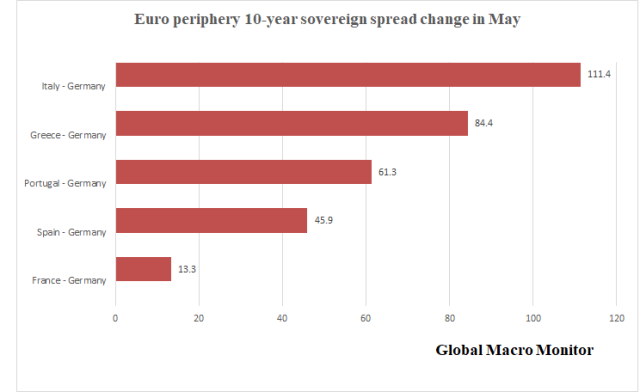 32 Responses to Europe Has A Big Problem