The swans were restless and a bit weaker today.

Italy 10-year is blowing out again, now just ten bps below May 29th closing high of 3.16 percent.  The yield curve in Italy continues its re-flattening, as shorts seem to be feasting on the two-year at 1.305 percent.  If that is the case, and our knowledge of the liquidity and the market microstructure of the euro periphery bond market is de minus, Portugal, and Spain 2-years are going to become juicy targets at around 0.0 percent as the ECB embarks on normalizing monetary policy.

Deutsche Bank stock attempted a rally but flopped at the close, down 3 percent off its intraday high.  There were rumors of a merger with Commerzbank floating around today.  Unicredit back below €14.00.

EM is ugly as in Brazil, which is becoming the poster child and main indicator species of diminishing global liquidity.  The Brazilian BOVESPA traded in a 7 percent range today, closing down 3 percent and now down over 14 percent since the April 30th close. The economic and politics in Brazil have been worse, but the idiosyncratic fundamental deterioration has provided a story and reason to sell.

Global liquidity is about to get exponentially worse in the coming months as the ECB changes monetary policy and Federal Reserve’s quantitative tightening (QT) caps step up to $50 billion per month in September.

Quite a bit of volatility in the U.S. 10-year yield today.  As it approached, 3 percent volume picked up as the buying algos kicked.  We have firm conviction 3 percent will not hold, and long rates are heading much higher than the market anticipates, unless, of course, the market is hit with a high sigma negative shock.  It may be a spike in long-term rates in the U.S. is that high sigma shock.

The sun came up today even as global macro risks are increasing ergo the risk markets are still bullish.   The prevailing narrative is now strong U.S. economic growth.

We don’t fight the market. 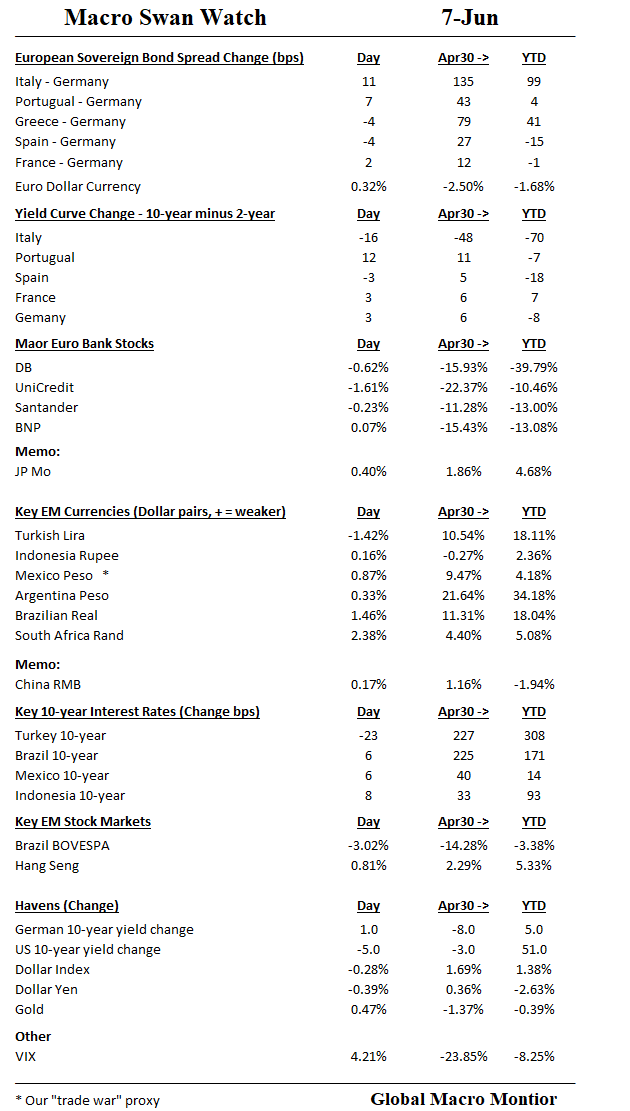 This entry was posted in Black Swan Watch, Uncategorized and tagged Macro Swans. Bookmark the permalink.