Enough Of This Racist Nonsense!

We are reposting a piece we wrote two-years ago.

Ironically, when we were back on the east coast in August 2018, we told one of our friends Trump’s racist dog whitles and blatent rasicm would lead to riots in the American streets.  Well,  here we are.

The results of last night’s primaries led the Drudge Report to proclaim,

‘A genenational time bomb going off’

We also find it interesting Mike Huckabee — a so-called “Christian” minister —  took down his racist tweet and we had to go out and find it and paste it back into the post.    Nothing Christ-like about his post, by the way.

We try to remain nonpartisan at the Global Macro Monitor,  have no problem taking shots at both parties, and, personally, are comfortable splitting tickets on an election ballot.  However, this tweet from Mike Huckabee strikes a deep nerve in us that really, really pisses us off.

Today is the birthday of my late brother who was murdered by an undocumented immigrant.  As his killer stabbed him in the chest, he declared, “all Anglos need to be exterminated.”

My brother left a two and five-year daughter.  It was an incredibly tragic experience that I wish on no family.

If any family has a right or reason to be angry at the immigration situation, it it ours.

Not all white students are shooters but a very infinitesimally small fraction are.  Should we therefore keep all white students out of high school because they fit the profile of a shooter?   That is the same asinine logic driving current immigration policy,  if one exists at all.

Shame on the president and his aides for exploiting the families of those who have suffered the tragedy of losing a loved one in such a situation.   Stoking fear, racism,  and bitterness to divide us is not going to bring any of our family members back nor will it do anything to solve the problem or prevent further tragedies.  On the contrary, it will only instigate more violence.

We need to focus on fixing the problem by first thinking hard and deciding what we want as a nation, not retreating to our default positions of what economists call corner solutions, that is completely open or completely closed borders.

What About Our Ancestors?

Under current law, most, if not all, our ancestors who immigrated to this great country would be deemed illegal and, before last week, would have had their children separated from them.   The generous immigration policies of a younger America is what made this nation great.   In a graying society immigration is essential to economic growth and cultural dynamism.

Yes, we should enforce the law but what law?

Such an important question needs to be debated in a forum where there is mutual trust and respect.   We can start by stopping and condemning the racist tweets like the one below.

Nancy Pelosi introduces her campaign committee for the take back of the House. pic.twitter.com/yKDhkVubck

[The orginal tweet was removed but we found a copy] 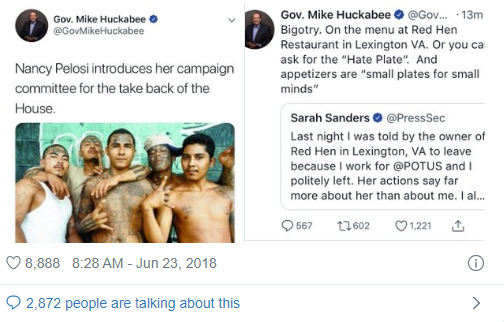 And this guy calls himself a Christian, much less a minister of the Gospel?   Governor Huckabee’s tweet is pure evil —  racist, intended to instill fear and to divide us.  Not to mention the tweet bears false witness against the minority leader, his sister in Christ, who graduated from Trinity College in Washington, D.C…

I fear for my brother, Governor Huckabee,  on Judgement Day,

They also will answer, ‘Lord, when did we see you hungry or thirsty or a stranger or needing clothes or sick or in prison, and did not help you?’

Finally,  we favor a relatively tolerant immigration policy because some of the greatest Americans we know are first-generation immigrants and generate a multiple of benefits to our society and economy, much more than they take from it.   It also is true at the macro level as reflected in a recent study by the NY Times,

The study found that between 2005 and 2014, refugees “contributed an estimated $269.1 billion in revenues to all levels of government” through the payment of federal, state, and local taxes — which far outweighed their cost to the country. “Overall, this report estimated that the net fiscal impact of refugees was positive over the 10-year period, at $63 billion.” When the study was completed in July, however, it was never publicly released, and the Trump administration dismissed the findings. – Vox, Sep. 2017

Why would the administration spike such a report?

By the way,  some of our friends were granted amnesty by the darling of conservatives, President Ronald Wilson Reagan.

Finally,  we have written about the labor shortages the country faces, especially in construction, which are driving up the price of homes putting, say,  a starter home out of reach of most young Americans.

Why wouldn’t we want more of these workers, who are willing to risk their lives to come to this country  to make a better life for their families.  You know, just as the pilgrims did?   Is not that the kind of work ethic that will Make America Great Again?   Just askin’.

We are better than this,  America.  Let’s work together to do a good immigration deal.  One that secures the borders,  maximizes our country’s interest, is respectful to all,  and is fair and just.  Amen.

16 Responses to Enough Of This Racist Nonsense!