Just before the close, Art Cashin, one of the best out there, cited the weak Treasury auctions and, ergo, worries China is pulling back on its Treasury purchases as a major factor behind the ugly stock sell-off.

Recall, also no FED participation in the auctions this month, and primary dealers took down a disproportionately large share of new issues this week.  The auctions ranged in size, from 12 to 42 percent larger relative to October 2017 in each maturity.

That is the Treasury financing needs due to larger budget deficits and quantitative tightening are growing rapidly.   The almost two decade long free ride and free money from central banks, including China and Japan,  is over.

Of course,  international reserves could begin to build rapidly forcing central banks into more Treasury securities but that scenario runs contrary to President Trump’s policy.  The administration is moving in the opposite the direction seeking to reduce bilateral trade deficits and hammering countries with weak currencies, defined, we suspect, based on purchasing power parity (PPP).  Foreign exchange intervention to maintain a stronger currency will lead to more foreign central bank selling of Treasury securities.

Nationalism can be a real bitch when you’re dependent on foreign financing.  Hope the administration gets woke before it’s too late.  We may have already screwed the pooch.

Hope you have been reading the Global Macro Monitor over the past month, folks. We gave you the heads up here:

The Gathering Storm In The Treasury Market 2.0
Free Ride Is Over: China & Japan Bailing On Treasuries

Central banks and foreigners have accumulated almost 75 percent of the  stock of marketable notes and bonds.  That liquidity is/has  dried up,  folks.   America First soon to be America Thirst? 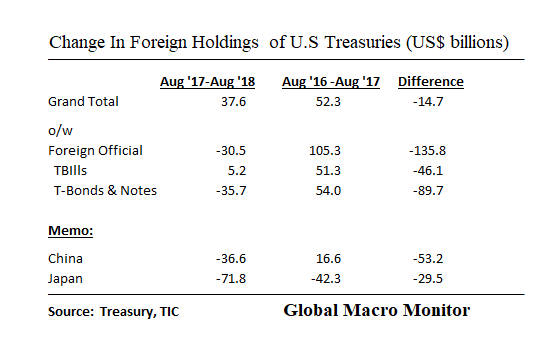 We should be out in the next few days with some barn burning and eye-opening data all tied to what we think is the meta narrative driving global market weakness.

The U.S. Treasury bond market is the center of universe, of which all asset markets are priced and circle.   Traders and investors must understand its dynamics, and not just in pricing but the kinetics of how it is funded.

Haven flows and/or another round of QE are the only hope of holding U.S. long-term yields down.  Not exactly a positive scenario, comrades.