Prime minister Theresa May brings her Brexit deal to parliament on Tuesday, which is widely expected to fail.  The government will cushion the blow by removing the potential for a do deal BREXIT, in our opinion.   We believe the PM is also a closet supporter of a second referendum.

You know our view on cable.  Very bullish.

An announcement of a second referendum takes sterling to 1.35, which then consolidates, and experiences some volatility over a contentious a campaign.  As the landslide for the remainers becomes evident, cable moves to 1.50, or maybe higher.

Not without some gap risk this week, however,  as the government could fall and a new election called.   Our stop on the March contract is in 1.2633 but we will be back in at lower prices.

Nevertheless, the sterling is now our favorite global macro trade with the best risk-reward, in our opinion.  We are a little nervous the trade is getting a tad bit crowded.  It’s always good to be nervous. 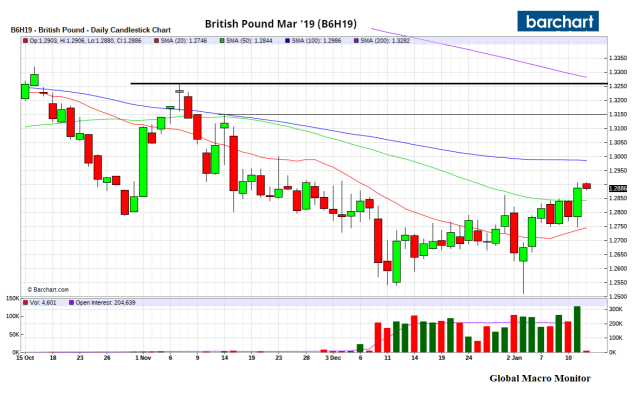 This entry was posted in Currency, Uncategorized and tagged British Pound. Bookmark the permalink.