Trade Talks & The Chinese New Year: The Year Of the Pig [In A Poke] 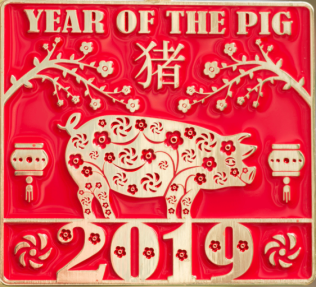 ‘Don’t buy a pig in a poke’ might seem odd and archaic language. It’s true that the phrase is very old, but actually it can be taken quite literally and remains good advice.

The advice being given is ‘don’t buy a pig until you have seen it’. This is enshrined in British commercial law as ‘caveat emptor’ – Latin for ‘let the buyer beware’. This remains the guiding principle of commerce in many countries and, in essence, supports the view that if you buy something you take responsibility to make sure it is what you intended to buy.

A poke is a sack or bag. It has a French origin as ‘poque’ and, like several other French words, its diminutive is formed by adding ‘ette’ or ‘et’ – hence ‘pocket’ began life with the meaning ‘small bag’. Poke is still in use in several English-speaking countries, notably Scotland and the USA, and describes just the sort of bag that would be useful for carrying a piglet to market.

A pig that’s in a poke might turn out to be no pig at all. If a merchant tried to cheat by substituting a lower value animal, the trick could be uncovered by letting the cat out of the bag. Many other European languages have a version of this phrase – most of them translating into English as a warning not to ‘buy a cat in a bag’. The advice has stood the test of time and people have been repeating it in one form or the other for getting on for five hundred years, maybe longer.    —  phrases.org.uk

Lots of happy talk in the Oval with  the Chinese today but….  The Wall Street Journal reports,

We are expecting no more than a pig in the poke in the Year of the Pig.  Of course, spun as the “greatest trade deal in the history of the world.”

There will be some Mad King risk as Trump will come under pressure for caving and to scrap the deal at the last minute as he did during the government shutdown.

The stronger the RMB, which is a real-time measurement of the country’s short-term economic prospects,  China’s negotiating leverage increases. 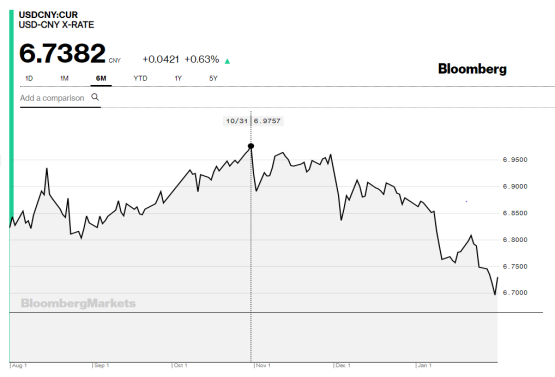 Don’t make this your trade strategy, Mr. President,  China is still a command economy not subject to market x/ the exchange rate.

China posts slowest economic numbers since 1990 due to U.S. trade tensions and new policies. Makes so much sense for China to finally do a Real Deal, and stop playing around!

This entry was posted in China, Uncategorized and tagged China Trade Deal. Bookmark the permalink.

6 Responses to Trade Talks & The Chinese New Year: The Year Of the Pig [In A Poke]