The Politics of Semantics 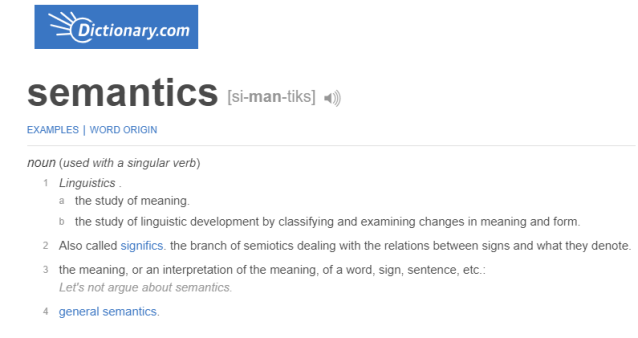 Are you surprised in our “post-truth” world the 2020 Presidential election is going to be framed by one word,  “Socialism?”

What exactly is socialism?

Bernie Sanders likes to call himself a democratic socialist but immediately identifies with the Scandinavian countries,

“When Bernie is asked, ‘Are you a socialist?’ he doesn’t deny it, and he immediately talks about Scandinavia. He uses them interchangeably. But if you look at his history, he knows the distinction,” Schwartz said.  – Politifact

Has Bernie Mislabeled Himself?

Yet Bret Stephens, the conservative New York Times columnist, in his Friday column had this little gem,

But then Stephens goes on to say this in the very same article,

So what is Bernie?  A Nordic capitalist or a Nordic socialist?

Guess your choice depends on your politics, no?   Stephens is either ignorant or logically inconsistent or…   you decide.

I had a political science professor, a conservative if you can believe it,  who used the term, “semantic fascism.”  I sense we are going to see a lot of it — on both sides — as the presidential campaign heats up.

Why, Lord, can’t we just stick to the issues?

The Rise Of Market Socialism

While we are on a roll let us rant against the rise of  “market socialism,” which we think is one of the worst of its kind.    Using the government to nationalize or socialize the losses and privatize the profits of the private sector is a genuine disgrace.   This was on full display during the 2008-09 financial crisis,  much of which was a “necessary evil” to save the system from going down, but also significantly contributed to the 2016 political Black Swan.

Now, whenever the S&P500 falls, say, 5 percent the new “Market Socialists,”  led by POTUS, Jim Cramer, and the clowns paraded on CNBC scream for a Fed bailout.   The use of monetary policy to support and drive up asset values is a major factor in the country’s growing wealth disparity and why much of the younger generation has been priced out of the housing market.  The political blowback is going to be yuuuge when this is all done.

Don’t get us wrong.  We are all about markets here at Global Macro Monitor.  We are free traders and believe prices are the best mechanism to allocate resources.  We also recognize markets often fail and government has a role to play in the economy.

It’s just we don’t believe the government should always run to intervene when markets fall.

Moreover, we are keenly aware the world is not perfect, nor black and white, we really don’t have truly free markets, that public policy is often held hostage to the highest bidder, and crony capitalism is ubiquitous and increasing.   We have a utilitarian bent and pragmatic angle on all things economic and are not held hostage by any certain ideology. If helping workers on a meaningful scale who have been hurt by free trade helps save the world trading system, for example, by all means, let’s get it freaking done!

The only policy that left- and right-wing populists can agree on to address economic decline is trade protectionism, which will make the world poorer – Raghuram Rajan

Energy Of the New Members

Nevertheless, we are truly enjoying watching the energy of the young members of Congress.  And especially how some in the middle and right get so worked up about their “aspirational overreach.”

Relax.  Though we do believe the country is moving left but not as far as the alarmists would have you to believe.

And that’s the point, isn’t it?  The new Congress reflects where the country is moving and that AOC is not the voice of all of the new members.

The Clash Of Generations

We also understand the righteous anger and empathize with these young members of Congress.  The hand they have been dealt by the older baby boomers is atrocious:  large public debts, underfunded pensions, shrinking job opportunities, skyrocketing college tuition, and a shitload of carbon in the air, which our futilitarian friends argue is beyond the tipping point.   We have been writing about this coming “clash of generations” for years.

Give them time.  They will find their way.  America’s dominant ideology has always been not to have one, but one of pragmatism.  We don’t think that has been entirely lost.

At the end of the day, taxes are most likely going higher, especially on the one percenters, and social spending is going higher over the next several years.  Tomorrow’s budget release aside.  It is the preference of the younger  body politic   and why the Republicans found it impossible to “repeal and replace” Obamacare, their top 2016 campaign promise,  even as they controlled all three Houses of the legislative and executive branches of the federal government.

The public debt is also going much higher, until, that is, there is some sort of market disruption, which is inevitable as we experienced in Q4 2018 where the stock markets cannot tolerate higher interest rates.

I recently heard a quote, can’t recall where and who it was attributed to, which nicely sums up our current debate: “if you want to live like the Swedes, you will be taxed like the Swedes.”   Kind of a takedown of sorts of our brothers and sisters of Modern Monetary Theory (MMT), which is experiencing its own smackdown and yuuge pushback from Larry Summers to Larry Fink.

Let’s conclude with an interesting but related aside.

I snapped this picture tonight of a mural on the side of a BJs Restaurant.  For those who have studied socialist realism art,  the mural looks like it could have come right out of Stalin’s Soviet Union or Mao’s China.   Nice blend of capitalism and socialism or socialist [that word of again!] culture,  don’t you think? 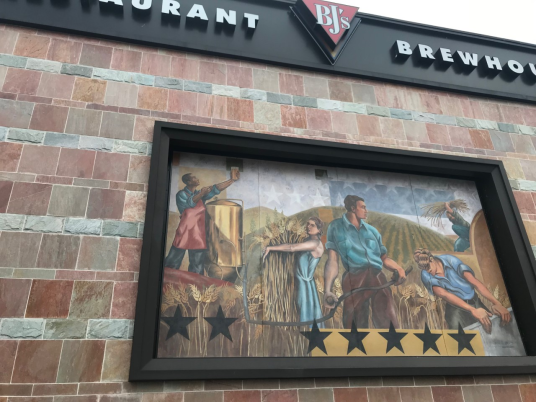 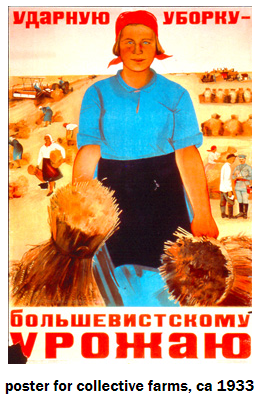 The post is dedicated to my good friend JP.

This entry was posted in Politics, Uncategorized and tagged Politics, Socialism. Bookmark the permalink.

4 Responses to The Politics of Semantics