Wow!  Mr. Market must love the taste of strawberries.

How long will it continue to be led and whipped around by this administration’s Gullible Travels on a China trade deal and get itself all lathered up over every positive POTUS tweet on an imminent deal?

Wait!  Is that little boy Kramer?

What is encouraging you to keep going? A strawberry? 🤣🍓 pic.twitter.com/J7iTDPsYkn

How Is It Going?

We can only infer from the tape bombs that hit us almost on a daily basis, such as the Trump-Xi March summit being pushed way out, from March to now talk of June, and Bloomberg reported yesterday that China is walking back some concessions.

Some U.S. negotiators are concerned that China is pushing back against American demands in trade talks, according to people familiar with the negotiations, even as President Donald Trump sounded optimistic about reaching a deal that could boost his reelection chances.

Chinese officials have shifted their stance because after agreeing to changes to their intellectual-property policies, they haven’t received assurances from the Trump administration that tariffs imposed on their exports would be lifted, two of the people said on condition of anonymity. — Bloomberg, March 19th

China is looking at excluding Boeing Co.’s troubled 737 MAX jet from a list of American exports it would buy as part of a trade deal with the US, people familiar with the matter said.

Boeing planes were featured on a draft list of American products China would buy to reduce its trade surplus with the US, the sources said, asking not to be identified discussing private deliberations. Now, safety concerns are pushing China to examine whether to cut the 737 MAX from the list altogether or replace it with other Boeing models after the crash of a plane operated by Ethiopian Airlines led to the aircraft being grounded worldwide, they said. – SCMP, March 20

Why is last night’s  Boeing tape bomb so important?

The chart below speaks for itself,  Heavy aircraft is one of China’s largest imports from the United States, though we are not sure of the actual impact the 737 Max has on total imports.  Chinese airlines took down 20 percent of 737 Max deliveries worldwide through January according to Boeing. 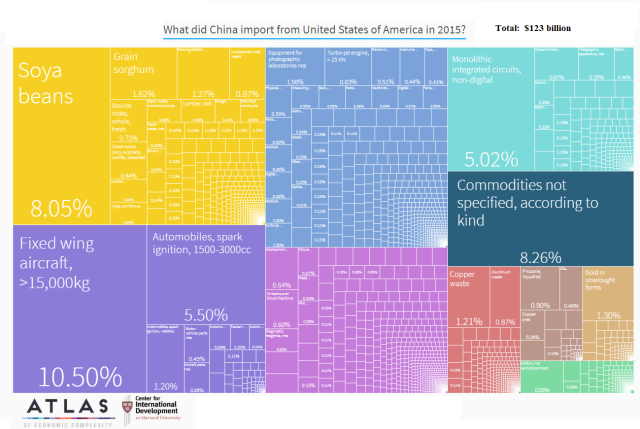 We have always believed that trade is just a small part of the increasingly complicated and complex U.S.-China relationship, and is won’t be easy to negotiate the deal that Trump administration would like to achieve.  China appears to be playing 3-D chess, while the U.S. plays checkers.

Furthermore, after hundreds of years climbing back to global superpower status, why would President Xi now give away the keys to the Middle Kingdom?

Study your history, folks.  China has not had such a great experience with western powers trying to force their hand on international trade,

In the 17th and 18th centuries, the demand for Chinese goods (particularly silk, porcelain, and tea) in Europe created a trade imbalance between Qing Imperial China and Great Britain. European silver flowed into China through the Canton System, which confined incoming foreign trade to the southern port city of Canton. To counter this imbalance, the British East India Company began to grow opium in India and smuggle them into China illegally. The influx of narcotics reversed the Chinese trade surplus, drained the economy of silver, and increased the numbers of opium addicts inside the country, outcomes that worried Chinese officials.

In 1839, the Daoguang Emperor, rejecting proposals to legalize and tax opium, appointed viceroyLin Zexu to go to Canton to halt the opium trade completely. Lin wrote to Queen Victoria an open letter in an appeal to her moral responsibility to stop the opium trade.[9] When he failed to get a response, he initially attempted to get foreign companies to forfeit their opium stores in exchange for tea, but this ultimately failed too. Then Lin resorted to using force in the western merchants’ enclave. He confiscated all supplies and ordered a blockade of foreign ships to get them to surrender their opium supply. Lin confiscated 20,283 chests of opium (approximately 1210 tons or 2.66 million pounds).

The British government responded by dispatching a military force to China and in the ensuing conflict, the Royal Navy used its naval and gunnery power to inflict a series of decisive defeats on the Chinese Empire, a tactic later referred to as gunboat diplomacy.  – Wikepedia

We find it extremely ironic, but not inappropriate, that President Trump has raised Chinese exported fentanyl to the U.S. in the trade talks.  The new Opium Wars?

The problem with that argument is China’s stock market is up almost double that of the U.S. year-to-date. 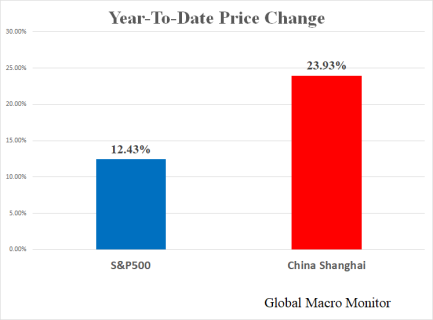 Does that mean, using POTUS logic,  China is winning?

Don’t get us wrong, we are rooting for a good deal, where China graduates to developed market status and adjusts its trade and investment policies accordingly.

It is clear, at least to us, the President does not understand free trade, that there will always be winners and losers when engaging in trade, but mostly winners in the form of higher real incomes and purchasing power for the general population.  Does he even understand American importers and consumers and not the Chinese are paying his tariffs?

We also feel bad for those in the rust belt, who are now paying higher prices for imported consumer goods but will never return to the golden age of employment that President Trump promised them during the campaign.  It’s time for more and accelerated forward-thinking to prepare these workers for the 21st plus century economy.  A new Marshall Plan for the rust belt.

His trade war has also torched the American farm belt and his comments today will not ease the anxiety in the corn and wheat fields of the heartland,

We’re not talking about removing [tariffs], we’re talking about leaving them for a substantial period of time, because we have to make sure that if we do the deal with China that China lives by the deal  – President Trump, CNBC, March 20th

The administration also has a lot of ‘splaining to do with American farmers as reports U.S. wheat farmers are losing market share in Japan to other countries that remained in the TPP,

US farm groups are ramping up pressure on Donald Trump to quickly launch trade talks with Tokyo, as they face mounting evidence of lost sales and market share in Japan following America’s withdrawal from the Trans-Pacific Partnership. In recent weeks, wheat, pork and beef producers in the US have complained that they are being rapidly outflanked and replaced in the lucrative Japanese market by rivals including Canada, Australia, and EU member states, whose trade deals with Japan entered into force in recent months.  – FT, March 18th

Hysteresis Due to TPP Pullout

At best, a bilateral trade deal with Japan, which even now looks distant, will not make American farmers better off than if the U.S. had stayed in TPP,  in our opinion.  And look at the freaking cost!

Moreover, there will be some hysteresis in terms of lost export markets.  Hysteresis implies that the lost export market share, may not necessarily be regained when a new bilateral trade deal is struck.  Competitors who entered the markets in order to exploit the U.S., temporary — we all can hope — protectionist backslide will not immediately be abandoned by these countries.

Art Of The Deal

Can you see the pattern developing and the results of the administration’s Art of Deal negotiating style and so-called trade and budget deals — that is little gain, lots of pain?

We leave you with two thoughts:

“The worst agricultural downturn since the 1980s is taking its toll on the emotional well-being of American farmers.

In Kentucky, Montana, and Florida, operators at Farm Aid’s hotline have seen a doubling of contacts for everything from financial counseling to crisis assistance. In Wisconsin, Dale Meyer has started holding monthly forums in the basement of his Loganville church following the suicide of a fellow parishioner, a farmer who’d fallen on hard times. In Minnesota, rural counselor Ted Matthews says he’s getting more and more calls.” –  Duluth News Tribune, March 20th

P.S.  We are still working a strategy to protect the contributors to Global Macro Monitor while dealing with the free riders but not at the expense of our readers in the weak currency countries, some of which have capital controls.  It’s coming.

Help keep the lights on by making a donation with any major credit card by clicking on the donate widget at the right side of the website.

This entry was posted in Agriculture, Trade War, Uncategorized and tagged Boeing 737 Max. Bookmark the permalink.