BFTP: The Biggest Risk At The Fed

It’s now been more than a year since this post.   We can’t take a victory lap on such nonsense but we will say, “we told you so.”   The consequences are gonna be Fugly.  Ugghh…

It is FOMC day, and the committee just raised the Fed Funds rate another 25 bps.

Well, actually, they increased the interest rate on excess reserves (IOER) by 25 bps to target a higher Fed Funds rate.   That is an additional $5.25 billion plus annual interest payment the Fed pays to the banks.

Strange days for monetary policy as the traditional approach to raising interest rates was to drain bank reserves through open market operations, making system liquidity tighter on the margin thus pushing up the Fed Funds rate.  Now they pay banks, add liquidity, to lock up their excess reserves at the Fed.  It is not a certainty banks will follow so the Fed augments the IOER tool with the overnight reverse repurchase agreement (ON RRP).

Yes, the Fed, like all of us, can’t predict the future, often has the wrong model of the economy, and tends to miss inflection points.  Welcome to the world of forecasting.

Ben S. Bernanke does not think the national housing boom is a bubble that is about to burst, he indicated to Congress last week, just a few days before President Bush nominated him to become the next chairman of the Federal Reserve.

U.S. house prices have risen by nearly 25 percent over the past two years, noted Bernanke, currently chairman of the president’s Council of Economic Advisers, in testimony to Congress’s Joint Economic Committee. But, these increases, he said, “largely reflect strong economic fundamentals,” such as strong growth in jobs, incomes and the number of new households.  –  Washington Post,  October 27, 2005

But this doesn’t concern us as much as the Fed’s independence.

That is we are worried more about the freedom from White House pressure and interference in conducting monetary policy than getting a few bps wrong on the Fed Funds rate.   This is especially true and relevant given the strongman tendencies and  lack of respect for institutional norms of the current president.

We concede that Kudlow may have made this statement before he was seated as N.E.C. chair.

We have not heard this kind of jawboning directed at the Fed from the White House for many years.  Even then, it was only after the president had left office.

WASHINGTON — Former President Bush said in a television interview that he blames Federal Reserve Chairman Alan Greenspan for his 1992 defeat.

“I think that if the interest rates had been lowered more dramatically that I would have been re-elected president because the [economic] recovery that we were in would have been more visible,” Mr. Bush told interviewer David Frost. “I reappointed him, and he disappointed me.”

Furthermore,  the administration is going to feel more political pressure from higher interest rates.    Let’s see how it behaves as the Fed continues to ratchet up rates and drains the lifeblood from the stock market.   The Dow Jones has no doubt become the voting machine for the Trump administration

Open Seats On The Federal Reserve

There are also three open seats on the Federal Reserve board, including the vice-chair, assuming Marvin Goodfriend is approved by the Sentate, but we do hear rumblings his confirmation may be in trouble.   Thus, five seats on the FOMC, including the NY Fed President,  are in play for some potential monetary mischief by the administration.

The question now is will Larry Kudlow use a “let it rip” litmus test in nominating future Fed governors?

If Trump wants to get reelected, he should rethink his Federal Reserve picks

If the Senate approves Goodfriend, there will be three more slots to fill on the Fed’s board of governors. Trump should avoid the usual Republican suspects and pick economists who are inclined to vote against rate increases. He can do this in the name of improving his reelection prospects. The rest of us will be happy to see workers get jobs and decent wages.  – Dean Baker,  LA Times,  March 15

That is the larger risk.  The administration attempts to stack the deck  with “let it rip” doves.  Maybe it makes for a short-term sugar high for markets but we suspect the long-term damage of such a move will start to be discounted – an air pocket in the dollar – causing a reduction in the Fed’s credibility and doing structural damage to the U.S. economy.

We have heard nobody, absolutely no one,  bring up this as a potential risk, though concerns have been raised about how slow the administration is moving  in replacing Federal Reserve board seats and the overall inexperience of the new Fed and staff.

But the future of Fed personnel is now uncertain. Trump still has four open board governor seats he could nominate, although he has been especially slow about filling the ranks of presidential appointees. At the same time, the influential New York Fed president post is up for grabs after William Dudley announced his early resignation, and the presidency of the Richmond Fed is also open after the prior president resigned in April due to a leak scandal.  – Business Insider,  November 26

We have no doubt foreign holders of U.S. assets, especially fixed-income, are concerned, however.   Foreigners, mainly central banks,  hold over $6 trillion of U.S. Treasury securities.  It could be another reason why the dollar is so weak when it should be strengthening.

Look at today’s price action after the FOMC announcement, where growth was upgraded but not inflation risks.    Maybe they are betting robots will fill the shortage of workers in the construction industry. 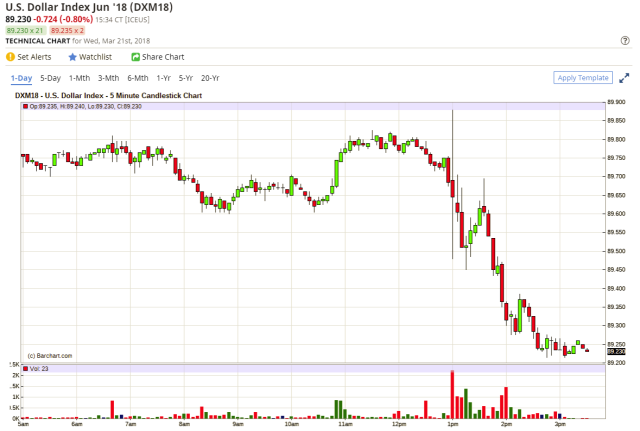 Interesting to hear the spin today:  “It was a dovish hike.”   The conclusion of many only after watching the price action.  This is what we call “retrofitting fundamentals to the price action.”

We have some good friends that deal with foreign investment in U.S. real estate.  They constantly pound us about how their Chinese investors believe the U.S. has a big debt problem, including underfunded pensions, that is going to be monetized and inflated away.   That is why they are buying up U.S. real assets.  Interesting,  and we always keep it on the back of our radar.

An overly dovish Fed seems to contradict everything that the traditional “hard money” Republican Party,  including “King Dollar” Larry Kudlow and  Under Secretary of the Treasury for International Affairs, David Malpass,  has stood for.

We believe political expediency will trump ideology in this administration, however.

If stocks do enter bear market territory, watch the decibel level  When [the] Doves Cry in the administration.  Will they lean hard on the Fed to ease up?

Then watch how the dollar behaves.  That will provide a signal of Fed credibility and a road map to the future.

Confidence is a very fragile thing as the greatest quarterback in NFL history often says.  The Fed has had the credibility and confidence of markets for almost three decades now, warranted, or not.   Can it endure this administration?

1 Response to BFTP: The Biggest Risk At The Fed