Why The Stock Bull Is A Big Meh For Most Americans

Interesting piece by the FT today that only one-third of Americans feel the benefits of the great bull market.   Only 40 percent of the population realizes stocks are up for the year.  These are tough numbers for a so-called “populist” president who claims the stock market bull as one of his greatest achievements and much of his base is not participating in the gains.

Nearly two-thirds of Americans say this year’s record-setting Wall Street rally has had little or no impact on their personal finances, calling into question whether one of the strongest bull markets in a decade will boost Donald Trump’s re-election chances.

A poll of likely voters for the Financial Times and the Peter G Peterson Foundation found 61 percent of Americans said stock market movements had little or no effect on their financial wellbeing. Thirty-nine percent said stock market performance had a “very strong” or “somewhat strong” impact.

The survey suggested most Americans are not aware of market movements, with just 40 percent of respondents correctly saying the stock market had increased in value in 2019. Forty-two percent of likely voters said the market was at “about the same” levels as at the start of the year, while 18 percent believed it had decreased.- FT

The above survey closely tracks the Fed’s data on the distribution of stock ownership by wealth percentiles.  Rarely does the economic data so closely confirm such a survey study. 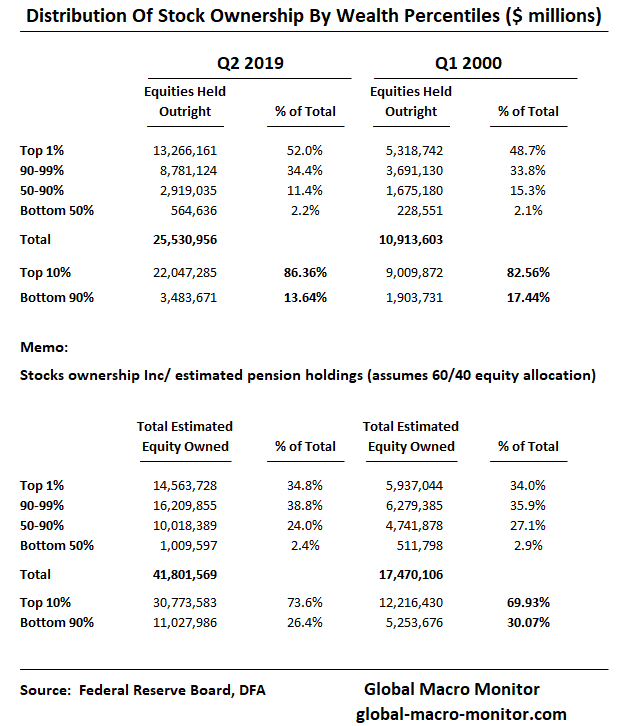 The data show that 86.4 percent of all public equity wealth is held by the top 10 percent of households as of the end of June 2019.  Even with a very generous assumption that 60 percent of pension entitlements are allocated to equities, the numbers just don’t change much.

Most of the difference, when including our generous assumption on pension assets,  is allocated to the upper-middle class, who fall in the 50-90 percentile of households, where one-third of the assets of this cohort group are in the form of pension entitlements.

Note the bottom 50 percent of households have almost no exposure to the stock market, except, of course, indirectly as their income and job prospects are determined by an asset-driven economy, highly dependent on ever-increasing bubbles.

Alan Greenspan used to talk a lot about the bond market conundrum and lays much of the blame of the credit and housing bubble on it.  Simply put, the Greenspan Fed raised the funds’ rate by over 400 basis points from 2004-2006 and the 10-year yield barely budged allowing the housing bubble to rage on.

In his February 17, 2005, testimony before the Committee on Banking, Housing, and Urban Affairs of the U.S. Senate, Federal Reserve Chairman Alan Greenspan observed that long-term rates had trended lower despite the 150-basis-point rise in the Federal Open Market Committee’s (FOMC’s) target for the federal funds rate. Rejecting a variety of possible explanations for the behavior as implausible he called it a “conundrum.”  – St. Louis Fed

We have posted several times that the conundrum was largely explained by foreign central banks recycling their FX reserves back into the U.S. Treasury market and the relative dearth of Treasury securities at the time.

We fear a new conundrum is developing in stocks or has already evolved. Though the equity market directly impacts only a small segment of the population, it has an outsized impact on the economy.   This, we believe, may result from the fact the market considers it the last financial sector with any semblance of an economic signal, though faint and often wrong as it may be, to divine future economic prospects, which determines confidence and thus consumer and capital spending decisions.

In 1966, four years before securing the Nobel Prize for economics, Paul Samuelson quipped that declines in U.S. stock prices had correctly predicted nine of the last five American recessions.  –  Bloomberg

Our suspicions are bolstered by the fact that QE has almost completely neutered and drowned out the economic signals of the bond market.  Great Ph.D. dissertation material.

Can somebody, for example,  please explain the fundamental economic signal of the Italian 10-year trading at 75 bps in September?

As the Brits head to the polls next week to choose a new government, we can paraphrase their great war-time PM with some confidence with respect to Mr. Market’s outsized impact, 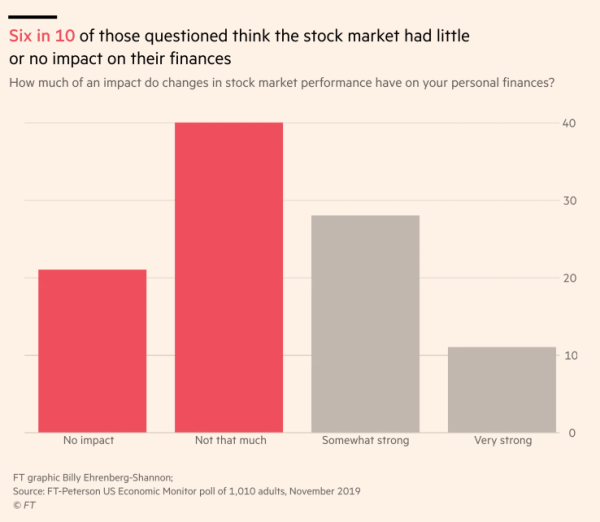 This entry was posted in Economics, Equities, Quotes, Uncategorized and tagged Stock Ownership. Bookmark the permalink.