FOMO – (Fear Of Missing Out)

Panic buying is a type of behavior marked by a rapid increase in purchase volume, typically causing the price of a good or security to increase. From a macro perspective, panic buying reduces supply and creates higher demand, leading to higher price inflation. On a micro level (e.g. in investment markets), fear of missing out (FOMO) or buying triggered by a short squeeze can exacerbate panic buying, into a so-called melt-up.  – Investopedia

This whole FOMO thingy is kind of perplexing to us.

We maintain Issac Newton learned the real lesson of gravity in a FOMO trade gone bad,

Back in the spring of 1720, Sir Isaac Newton owned shares in the South Sea Company, the hottest stock in England. Sensing that the market was getting out of hand, the great physicist muttered that he ‘could calculate the motions of the heavenly bodies, but not the madness of the people.’ Newton dumped his South Sea shares, pocketing a 100% profit totaling £7,000. But just months later, swept up in the wild enthusiasm of the market, Newton jumped back in at a much higher price — and lost £20,000 (or more than $3 million in [2002-2003’s] money. For the rest of his life, he forbade anyone to speak the words ‘South Sea’ in his presence. –  Open Culture

Then, again,  we don’t bother trying to understand the markets anymore as they are no longer markets, and have been essentially nationalized and now tools of the state.

Yes, I get it and recall my hedge funds days of missing out or being caught on the wrong side of a big rally.  In fact, it resulted in me leaving the industry.

Here’s the short of it:

I was in Venezuela pre-Chavez for a week to do some due diligence,  “kick the tires,”  and meet with government officials.  After arriving at the Caracas airport (long drive over the hill from downtown) for my return to NYC, with connecting flights through San Juan/Miami, I called my favorite salesman for a market update.

He proclaimed excitedly, “the market is screaming, some bonds are even up 5 percent on the week.”

I had learned, through many expensive lessons, to trim down my long positions when I traveled.

Upon hearing my bond sales guy,  I instantly came down with a massive migraine and with no ibuprofen.  I missed another big move, which I thought was unwarranted, but knew I had to go back to the office and explain to my boss, a Master of the Universe legend,  why I was now underperforming.

Making the three connections back to New York,  I spent much of my time in the air in the restroom doing the technicolor-yawn.  After touching down at JFK, I had made up my mind to leave the business and venture out on my own.   True story.

Anyone who thinks trading or investing, especially other people’s money (OPM) is easy, why aren’t you on your yacht in the Caribbean reading this post?

Career Risk Of Missing Out

We understand and have experienced first hand the “career risk” and fear that professional traders and portfolio managers face missing big FOMO rallies, even if they are fully cognizant the moves are unwarranted and unsustainable.  So, dear readers, spare us the email lectures.

But this rally?  Almost everyone knows it’s absurd yet some still chase.

It reminds us of passengers chasing down the Titanic, knowing full well it is going to sink before docking at the Chelsea Pier on New York’s West Side but just can’t resist the four days of partying and world-class cuisine.  Seriously?

If you have been around the block a few times, this isn’t the first time you witnessed a Chasing The Titantic rally.

Furthermore, who would of thunk that the rise of daytraders bored without their sport and circus would be leading the charge?

This is exactly what I was warning of in the May 1st Afternoon Audit. Day trading replacing sports betting / gambling as America’s past time. This is material retail volume. Partly explains disconnect between economy and the stock market. Be skeptical of current prices. pic.twitter.com/C04dezRuzL

We keep every market we follow or trade,  in the context:  Is it cheap, is it expensive?

For some markets, such as commodities, which trade purely on supply and demand it’s not a relevant query.

Though my background is a trader, one of the first principles I learned as a Wall Street newbie was from my boss who sat me down before bestowing the firm’s capital to my trading book,

“I don’t like being long anything that is expensive without being girded by strong fundamentals.”  –  Tom ____

The current U.S. stock market is at its most extreme valuation levels in history measured by our and Warren Buffet’s favorite metric — total stock market capitalization-to-GDP.  We now estimate (based on a Q2 GDP estimate) the metric at 164 percent, which is 20 points higher than the dot.com bubble peak, almost 15 percent on a proportional basis.

In addition, the beginning valuation of the new bull market, which began on March 23rd was 105.3 percent, almost double the average starting valuations of all prior bull markets since 1974 of 53.1 percent.  Not a stellar initial condition for a sustainable and stable bull market. 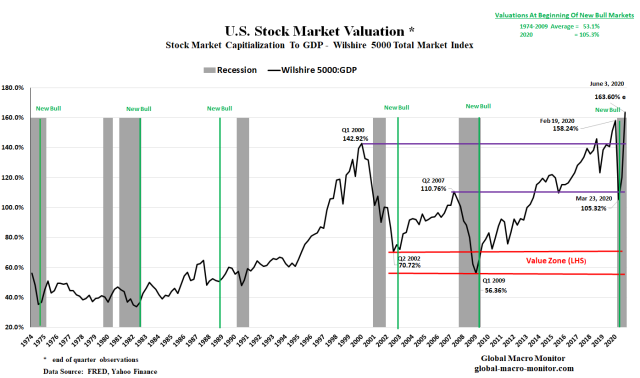 Moreover, the fundamentals are horrendous.

We recognize the current GDP now Q2 estimate of -53.8 percent does not reflect the true underlying fundamentals of the economy.   But nobody knows and can measure the economy’s health as we are still in the midst of the COVID hurricane.   We are taking the under, however.

This is not news to anyone but if you really believe the fundamentals are priced, well,  good for you!

Trump is almost surely going to get thumped in Novie, which will result in higher corporate and capital gains taxes.  You really think that is priced? 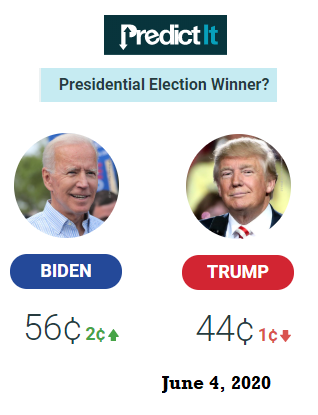 We will make a small concession that the Trump administration is such a threat to the global trading system and international stability,  the market may be in Dump Trump rally mode — but at these valuations, we are not buying.   Moreover, didn’t the market geniuses tell us that stocks would immediately sell-off if it sensed Trump would lose in November?

We also can’t understand how the President’s advisers think a stock market close to its record highs, coupled with depression level unemployment makes for good politics? Voters may question again, as they did in 2016, who really got bailed out:  Wall Street or Main Street?

See our post, Why The Stock Bull Is A Big Meh For Most Americans.

By the way,  PreditIt is now giving the Democrats a 53 percent probability of taking back the Senate, which is up from 39 percent since our April 13th post, Prepare For The Senate To Flip.  Some of our Wall Street friends laughed us off over that post but we were putting our money on our analysis and are now up 36 percent in 38 trading days.

We are also looking forward to taking several Benjamins and Grovers from our friends who make their political bets, based purely on emotion.   We made a few bets before the 2016 election that Trump would win the electoral college and Clinton would take the popular vote.  One friend responded to our election eve email, “sure you didn’t make a typo?”

We didn’t bet with our emotion or political bias but based on the analysis of how the Hispanic vote was dispersed throughout the country and an approval rating for Congress, which was less than 10 percent, if our memory is correct.

Here’s to hoping a Democratic government will realize they can only achieve their objectives with a strong economy driven primarily by a healthy and dynamic private sector.  The hard left of the Party still doesn’t seem to get it.  You can’t spend and print your way to prosperity.

Watch The Next Two GDP Prints

Some argue the market rally is pricing in the “recovery.”

There is no doubt a record Q3 GDP growth print is coming, quite possibly by a factor 2x the largest post-war quarterly growth Q1 1950 print of 16.7 percent.  Note the headline number is the annualized Q/Q growth.

The Atlanta Fed GDP now just marked down their estimate today of Q2 growth to — are you sitting down? —  -53.8 percent, which translates to a Q/Q decline of 17.6 percent. 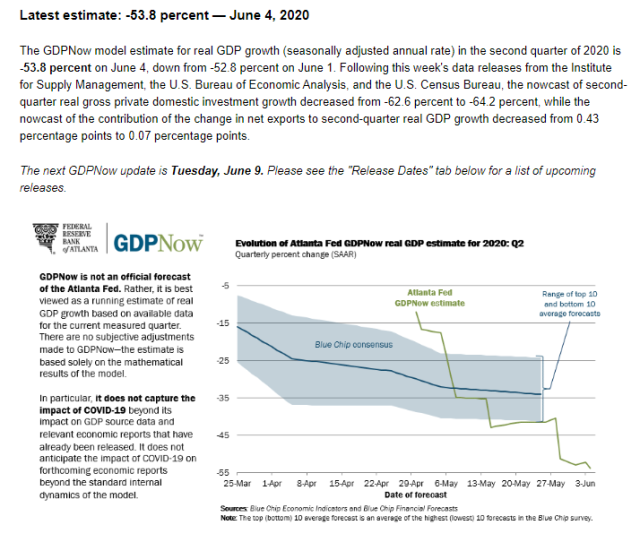 That would put real output at the end of June almost 19 percent below its Q4 2019 level.

Even if headline Q3 GDP comes at a whopping plus 30 percent, the real economy would still be 13 percent below its 2019 end-of-year output.

We estimate the quarterly GDP prints needed to get the economy back to even in the table below assuming the latest GDP now estimate holds.  For example, for a full V-shaped rebound by Q3 2020, the headline number for Q3 would have to print at 127.3 percent.  Not likely.

To get back to even (Q4 2019 levels), the quarterly GDP headline number would have to average 14.7 percent over the six quarters beginning in Q3 2020.  Not likely.

Do you really think the stock market is pricing a V-shaped economic recovery or even understands and has internalized the following scenarios in the table? 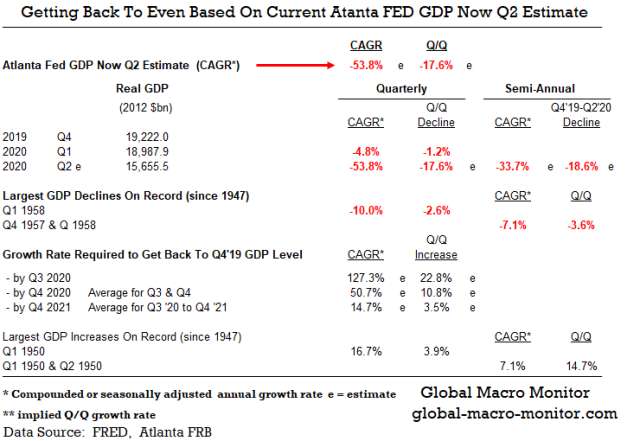 Setting aside the fact the stock market is no longer driven by market forces, including and especially fundamentals,  the only sense we can make of the recent price action is that it signals the beginning of the Venezuelan model.

That is, stocks are sniffing out some big-time future inflation and are now the inflation hedge of choice.  Not a zero probability but kind of a stretch at this point.

What is most likely occurring, in our opinion, and I haven’t run this piece by our crack stock picker, Carol, who has a much longer time horizon,  is the asset bubbles were only partially allowed to deflate before being reinflated by the largest monetary stimulus in the history of the world.

Even still, unless the market is morphing into the Venezuela model, the stock market in a macro sense is at dangerously high levels and I, personally wouldn’t touch it even with your 50-foot pole.

Carol always reminds us, however, money can still be made in individual stocks and not everybody has the flexibility or the desire to wait patiently in an all-cash/gold position.

If you have been reading GMM over the years, you know we are big fans of Robert Shiller,

We think Shiller’s best work was Market Volatility and specifically the following,

The Ambiguity of Stock Value

Stock prices are likely to be among the prices that are relatively vulnerable to purely social movements because there is no accepted theory by which to understand the worth of stocks….investors have no model or at best a very incomplete model of behavior of prices, dividend, or earnings, of speculative assets.

Shiller nails it here.  Stock values are ambiguous as there are no models to determine their “true” price.

Currently, nobody knows the long-term damage that the COVID crisis has done to the economy, how robust the recovery will be or how much hysteresis will exist as the economy fully reopens,

Hysteresis in the field of economics refers to an event in the economy that persists into the future, even after the factors that led to that event have been removed. – Investopedia

In other words,  there’s a lot of macro ambiguity and uncertainty out there.

Asset bubbles thrive in an environment of ambiguity and easy money.

The passive crowd, quants, technicians, and algos couldn’t spot a bubble if it smacked them square in the face.  Most are just way too myopic and have no context of valuation.

To rationalize this price action is their world?  The market is going up because it’s going up.

Markets do like to go up.  Until they don’t. 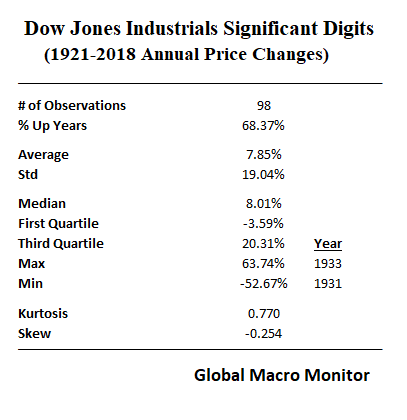