If War Comes, It Won’t Be Your Father’s War

Just a heads up and reminder, folks.   Do some homework.

SAN JOSE, Calif. (AP) — Security researcher Brian Wallace was on the trail of hackers who had snatched a California university’s housing files when he stumbled into a larger nightmare: Cyberattackers had opened a pathway into the networks running the United States power grid.

Digital clues pointed to Iranian hackers. And Wallace found that they had already taken passwords, as well as engineering drawings of dozens of power plants, at least one with the title “Mission Critical.” The drawings were so detailed that experts say skilled attackers could have used them, along with other tools and malicious code, to knock out electricity flowing to millions of homes. – Times of Israel,  Dec 2015

You can start by reading Ted Koppel’s book on cyberattacks, 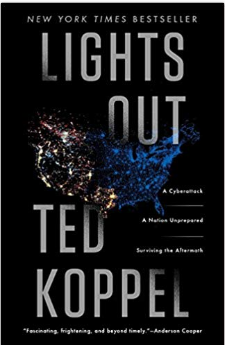 In this New York Times bestselling investigation, Ted Koppel reveals that a major cyberattack on America’s power grid is not only possible but likely, that it would be devastating, and that the United States is shockingly unprepared.

Imagine a blackout lasting not days, but weeks or months. Tens of millions of people over several states are affected. For those without access to a generator, there is no running water, no sewage, no refrigeration or light. Food and medical supplies are dwindling. Devices we rely on have gone dark. Banks no longer function, looting is widespread, and law and order are being tested as never before.   – Amazon

This entry was posted in Geopolitical, Uncategorized and tagged Cyberattack, Iran War. Bookmark the permalink.