Since the COVID crisis hit America, many businesses are operating at limited capacity while others have ceased operations completely.  The unprecedented aggregate supply and demand shock to the U.S. economy has resulted in horrific economic data, including the 20.5 in nonfarm payroll jobs lost in April and the unemployment rates shooting up over 14 percent.

The data released Friday also caused the Atlanta Fed’s GDP Now model to lower its Q2 GDP estimate to a stunning annualized -34.9 percent, which puts it at the lower end of the range of Blue Chip forecasts.  The GDP Now Q2 estimate will certainly change as new economic data is released over the next few months.

It is important to keep the data in context.  The economy has been slammed shut for two months and is just starting to slowly reopen.   The data surely does not reflect the prospects for the economy over the next 12 months unless a second and more virulent wave of COVID-19 breaks out, which is not a zero probability, by the way.

Still, if Q2 GDP does come in at the annualized -34.9 percent, it would represent a quarterly collapse 3.5x the next largest decline of 10.0 percent during the Eisenhower recession in Q1 1958.  Even more stunning, the non annualized first-half 11.3 percent GDP collapse in 2020 would approach the worst year of the Great Depression when GDP fell 13.1 percent for the entire year during a period of mass bank failures. 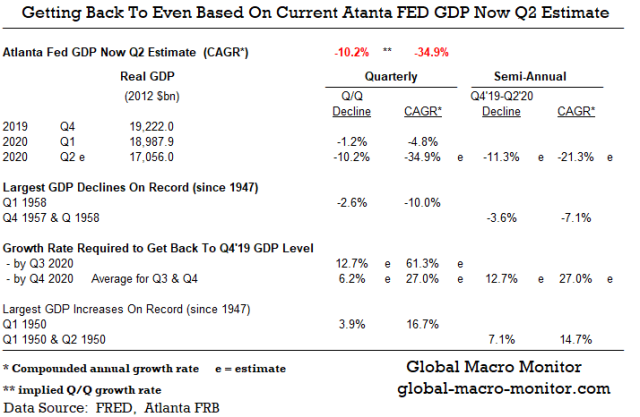 We all can take a little consolation and hope, at least for now, that though we are witnessing economic data plumbing the depths of the Great Depression, the data will improve as the economy slowly reopens.  It is uncertain how much structural damage the pandemic and the temporary lockdown has done to the economy but it will be significant.

There is also very little doubt it will take some time for the economy to recover.  How long is anyone’s guess?

Recovery During The Great Depression 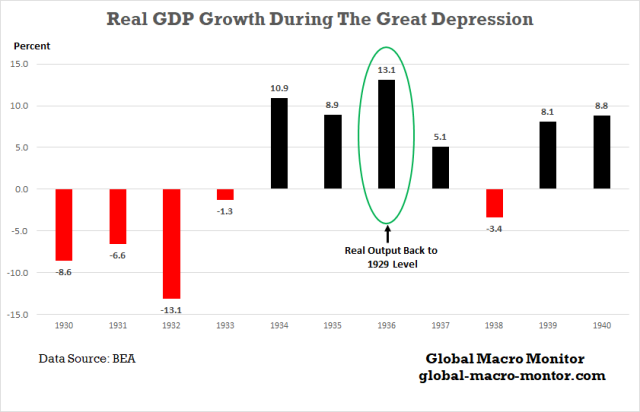 During the Great Depression, the economy didn’t recover its 1929 real output level until 1936.

Furthermore, because of the virulent deflationary forces that took hold during the Depression, the result of the 25-30 percent contraction in the monetary aggregates, caused by the massive bank failures from 1931-33, nominal GDP did not recover its 1929 level until 1941.  From 1929 to 1933,  demand deposits, which made up over 85 percent of narrow money in 1929, fell by 35 percent.  The Fed failed big-time in its role as lender of last resort.

That’s not the problem today as illustrated in the following charts of the compounded rate of change in M1 and M2.  The U.S. central bank has painted itself into a corner as markets and the economy cannot survive without ever increasing doses of free and easy money.

While many fret over temporary deflationary pressures, some of which are just relative price changes as the economy begins to adjust to the post-COVID new normal,  we fear more about a coming wave of big inflation over the medium-term, which absolutely nobody is prepared.

Lord have mercy on bond investors.

A macro argument has and can be made when the monetary aggregates are growing faster than nominal GDP the differential provides the liquidity and rocket fuel for the stock market.  Just throwin’ it out there and if traders believe it is true it effectively becomes a self fulfilling feedback loop.

We suspect the economy has already troughed and the employment data will bottom in May allowing GDP to realize a fairly sharp snapback in Q3, which will most likely exceed the 3.9 percent largest Q/Q GDP increase in the post-WWII period, realized in Q1 1950.    There is no doubt the Trump administration will sell it as “the greatest economic recovery in history” and tout the huge annualized GDP growth number.

If the economy can muster, say, a 5.0 percent Q/Q growth rate in the third quarter, which may be a push but not totally unreasonable that translates into a 27.6 percent growth headline number, far exceeding the Q1 1950 16.7 percent annualized growth rate.  Don’t you think the White House is preparing the pom-poms for such a rebound and cranking up the Tweet machine?   We suspect this will be the central focus of the President’s campaign strategy.

Even so, U.S. real output will still be down 6.8 percent from its 2019 closing high and unemployment will most likely be in low double digits.  Can Trump be re-elected with those numbers?

The body politic may give another POTUS, who is more empathetic, honest, more decisive, and popular the benefit of the doubt but that is not who Donald Trump is.

Based on our analysis, not our political bias,  our central case, assuming a fair election, is the Democrats are going to take the White House, Senate, and House by wider than expected margins in November.

Recall our post in early April,  Prepare For The Senate To Flip, when we were a lone voice crying in the wilderness.  We were also putting our money where our analysis is,

We look at the individual Senate races and can’t understand why PredictIt is still pricing the Republicans to remain in control of the Senate with a 61 percent probability.

…We have our money where our analysis is, betting on a Blue Senate, and if we are right, we are looking at a 439.11 percent compounded annual return (CAAG) by election day.  Beat that in the stonk market, folks. — GMM, April 13

The market is now even money and marching north that the Democrats will take the Senate. We are up 28 percent in 28 days, and now everyone and their mother on Mothers Day is talking about how the Upper Chamber is now in play.   We do realize 175 days to election day is an eternity in politics and much can change but we are sensing a wave election is building.

Investors and businesses should plan accordingly, including for higher corporate and capital gains taxes, which are the low hanging fruit.  More regulation of the financial markets and industry will almost certainly be on the docket.

The markets are still obsessing over “flattening the curve” and the first-order existential effects of the pandemic.  This crisis has n dimensions, however, including state and local government budget crises, a coming tsunami of bankruptcies, and an emerging market debt crises. There is also now increased uncertainty over private property rights, an existential crisis for the Euro currency and European Union,  doubts that small business can survive, especially independent restaurants, and there are many other concerns.

Still a buyer of stocks?

There you have it, folks.  Our thoughts and best guesses.  We are all in the guessing game these days and remain at the mercy of whatever trajectory the pandemic decides to take, which will largely be determined by the efficacy of U.S. health policy, or lack thereof.

As always we reserve the right to be wrong.

GMM Has Some Positive News

We have some potential good news on the ex-Morgan Stanley stock picker we wrote about last month.  We had a chance to analyze her portfolio of 35 large-cap stocks this weekend, looking at the returns for the year and the critical dates of the Feb 19th market high and March 23rd recent low.

Nothing short of astonishing and not tech stocks, by the way.  Check this out.

We are negotiating on how to bring her in and monetizing her work, which will help you and I make some money.   We are global macro 24/7 and its nice to have a very smart and savvy stock picker around.  Stay tuned for that.