In graduate school,  Rudy Dornbush, Jacob Frankel, and Michael Mussa, all giants in the field of macro and international economics,  gave a seminar to our economics department.  I was invited to dinner with them along with the department’s international economics professors.  The one take-away from that dinner was a comment seared into my mind by Jacob Frankel, who went on to become the Governor of the Bank of Israel  and now serves as Chairman of JPMorgan Chase International.

Why Markets Do What They Do

Over dinner, he laughingly mocked the financial media for their propensity to assign specific reasons for why the market did what it did on a daily basis.  He quoted two diametrically opposed and contradictory headlines, one from the NY Times and the other from the LA Times, which explained why the market was down that day.   That comment has stuck with me throughout my career — nobody knows what really causes the stock market to do what it does on a daily basis.  The best, and the safest explanation I have heard on a down day, for example, is  “there were more sellers and buyers,” which doesn’t even suffice.  The comment should be qualified, “there were more sellers than buyers at yesterday’s closing prices.”

In a free market that clears — which are rapidly moving toward extinction with the Fed’s backstopping of almost everything — the number of buyers always equate to the number of  sellers.   It is prices that adjust to allow the market to match-up sales with buys to move to equilbrium.   It is increasingly obvious the Fed can’t allow markets to operate freely as the economic consequences of allowing prices to move to their equilibrium and fair value are not politically palatable or maybe not even be possible without blowing up the global economy.

Before proceeding, a sidenote on last night’s (Tuesday)  conversation with GMM’s crack stock-picker Coach Carol, who has a much longer-term view and a much better track record than yours truly.  She was much less sanguine on the market than I can remember and has been trimming her positions, concerned about the end of the quarter positioning and profit-taking by institutional investors.   Our ears perked up.

Unfortunately, she has been sidelined, bravely battling a relapse of ovarian cancer, and has not been able to post as much. But she did remind us,

“there will continue to be individual companies that will continue to grow and thrive regardless of market conditions. Not everything collapsed during the mass shutdowns of Covid-19, indeed some companies thrived and shot to new ATHs. One needs to be far more disciplined and selective in choosing which stocks are appropriate to hold in a bear market. Also consider your tolerance for risk, because markets will be more volatile in a bear market.“

I also had a little health scare last week and have been unable to update her recent sales, which I will try to get to over the weekend posting the trade tickets with a timestamp.

Readers of the GMM should not find any of the above either novel or surprising as we have been all over both, early and alone.

We are growing increasingly bearish on America’s prospect to arrest the spread of COVID-19 due to growing restlessness over the shelter-in-place rules leading to quarantine fatigue, weak political leadership, and lack of uniform measures to mitigate the spread across, and within, all fifty states. — America’s Bearish Day At The Beach, GMM, April 25th

If the November election is legit, a big if, it will be a freaking blow-out.

We have our money where our analysis is, betting on a Blue Senate, and if we are right, we are looking at a 439.11 percent compounded annual return (CAAG) by election day.  Beat that in the stonk market, folks. —  Prepare For The Senate To Flip, April 13th

Corporate taxes are going higher and so are capital gains taxes.

The tax changes, especially on long-term capital gains, will go along way in making the U.S. tax system appear “fairer” and will eliminate the nonsense, such as following,

The market seems to think it’s business as usual and not one peep about this from the FinMedia geniuses and the potential for massive tax selling as the general election approaches.

You know our mantra, folks, always best to  sell before everyone else does. — GMM, June 18th

Mocking Of The Whales And Extreme Valuation

We have written in several posts that when the idjit trading newbies begin to mock Warren Buffett is is time to beware,

But this one really takes the cake,

Dave is right. The “liquidationists” are still bitter that the Fed changed the rules in mid-March. Our job is not to opine on the rules and environment, just invest in whatever environment exists. https://t.co/mLIdr5RP1g

Howard Marks, a liquidationist?  You’ve got to be shitting me.

My money is on and with Buffett, Marks, and Grantham.  Anyday, anytime, all the time.

"To paraphrase Jeremy Grantham, we now find ourselves in the top 1% of stock market valuations and the bottom 1% of economic outcomes."
—@jessefelder

The macro gang at GMM has been out of the market for several months and won’t even think about a long-term position until the market valuation becomes much more attractive, which is a long way down.   We defer to our stock-picker, Coach Carol,  to scout out individual stocks with special stories where money can be made even in a bear market.

Our favorite valuation metric illustrates the stock market is currently at an extreme valuation level.  We concede the metric should be helped by a record GDP growth print in Q3 and that record low-interest rates and unprecedented Federal Reserve market intervention be considered to normalize the number.  But still, come on, Mr. Market, stop deluding yourself.

The stars are aligned, the moon is in the seventh house and Jupiter is aligned with Mars for a nasty and protracted bear market.  The political winds are blowing against capital, the robustness of the economic recovery is growing increasingly uncertain, and globalization, the main driver of the secular bull market is in retreat.  The timing is anyone’s guess, however.

The Fed, with its massive quantitative easing,  removing trillions of dollars of assets from the markets, has created a scarcity induced Beanie Baby-like stock market bubble, 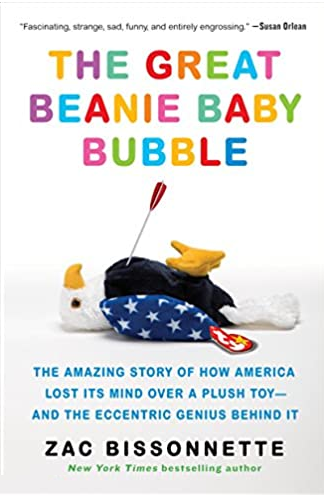 ..the little bean-filled sacks were more than a toy: they were an investment vehicle. Fueled by a rabid collectors’ market, Ty Inc. had just exceeded $1B in annual sales. Certain “retired” characters were going for as much as $13k on the resale market — 3,000x their original price.

…his [ Ty Warner] biggest stroke of genius came in 1995, when he surmised that if he “retired” certain Beanie Babies after a short period of time, it would create an illusion of scarcity (in reality, Ty was pumping out millions of them in overseas factories).

…One night in 1999, Ty announced the retirement of several Beanie Babies… and nothing happened. No market swell. No value increase. Nothing.

It was the beginning of the end. Collectors panicked and took to eBay to sell off huge swaths of the toys, flooding the market with a massive surplus of Beanie Babies. Their value, which was contingent on the illusion of scarcity, plummeted.

In a desperate bid to save a sinking ship, Ty announced that all Beanie Babies would go out of production at the end of 1999. It didn’t work. — The Hustle

Yes, we get it, Apple’s stock is not a beanie baby.  We used the analogy to make a point.  Spare us the emails, please.