America’s Bearish Day At The Beach

THOUSANDS of people in California flocked to the beach Friday as the state endured a heatwave — despite the state’s stay-at-home orders meant to prevent the spread of the coronavirus.

Amid the global pandemic that’s killed more than 1,600 people in the Golden State, an estimated 40,000 people hung out at Newport Beach and thousands of others spent time at Huntington Beach. – U.S. Sun

This is distressing.  Our generation(s) are failing its big test, which almost ensures a prolonged economic depression.

Researchers tracking smartphone data say they recently made a disturbing discovery: For the first time since states began implementing stay-at-home orders in mid-March to limit the spread of the novel coronavirus, Americans are staying home less.

The nationwide shift during the week of April 13 was relatively slight. However, any loss of momentum, particularly when stay-in-place orders remain in effect across most of the country, has some public health experts worried about “quarantine fatigue.” Any increase in travel, they say, is premature when staying home remains the most effective way to limit the spread of the virus until widespread testing and contact tracing become available.  –  Stanford Advocate

Sacrificing the beach to sit at home on the couch and watch reruns of the Dodgers and Lakers is hardly a test.  How long would we have lasted on the beaches of Normandy and the stress of the Great Depression?  That beach in the above picture is hardly Omaha beach and those on the beach are not exactly patriots storming the beach, though we are empathetic to thier plight, even if LA is in the midst of a record-breaking heatwave and the Orange County beaches are open for business.

Our lack of discipline, some of which is the result of failed political leadership, is only going to prolong the health and economic crisis.  A double-minded country is unstable in all her ways.

If sitting on the couch awhile longer to protect the last few of the Greatest Generation and America’s vulnerable is too big of a sacrifice then, “Houston, we have a [big freaking] problem.”  COVID has exposed some very big cracks in American society.

If you want to go to the beach that’s fine as long as it doesn’t put others at risk.  But it does, not only your immediate family but entire communities and the country.

We are, at heart, libertarians, believe in limited government, and that the private sector is what creates the nation’s wealth and increases its citizens’ standard of living.  There is a role of government in our world, however, when markets fail, supporting public goods, and mitigating private behavior externalities, including providing a strong safety net for the most vulnerable.

Our perspective on most social issues is summed up in the following phrase, which has been oft attributed (we could not document) to Rosseau,  John Stuart Mill,  Oliver Wendall Holmes Jr, and Abraham Lincoln,

Each side takes the position of the man who was arrested for swinging his arms and hitting another in the nose, and asked the judge if he did not have a right to swing his arms in a free country. “Your right to swing your arms ends just where the other man’s nose begins. —  Harvard Law Review, “Freedom of Speech in War Time,”  June 1919

In today’s context,  “your right to go to the beach ends where it increases the risk of killing your neighbor.”   In economist speak, if your personal freedom results in negative externalities, which impose on my rights and liberties,  the governing authorities should impose limits or attempt to mitigate the damage.

It looks like,  with no vaccine in sight and no unified discipline across all 50 states, and woefully weak political leadership, herd immunity is going to be the end game.  That is 60-70 percent of the population needs to be infected before the virus stops burning through America.  Very sad.

We’ve put together some back of the envelope calculations in the following table based on simple assumptions that 5 percent of America’s population is currently infected, which drops the concurrent mortality rate down to 0.32 percent, very generous compared to the 2 percent estimate that holds with the conventional wisdom.

Using that mortality rate, assuming 60 percent of the American population is eventually infected,  the death toll will rise to 641,000, which puts us in about two outs in the bottom of the first in a nine-inning baseball game.

If you think the economy can recover as the death toll marches toward 600k, well, you need to inject some bleach into your brain.

Don’t take our back-of-the-envelope estimates as a scientific epidemiology model.

According to the Tracking Project’s figures, nearly one in five people who get tested for the coronavirus in the United States is found to have it. In other words, the country has what is called a “test-positivity rate” of nearly 20 percent.

That is “very high,” Jason Andrews, an infectious-disease professor at Stanford, told us. Such a high test-positivity rate almost certainly means that the U.S. is not testing everyone who has been infected with the pathogen, because it implies that doctors are testing only people with a very high probability of having the infection. People with milder symptoms, to say nothing of those with none at all, are going undercounted. Countries that test broadly should encounter far more people who are not infected than people who are, so their test-positivity rate should be lower.

…“We just haven’t tested enough people yet,” he said. “If you were doing random screening of the whole population, we just don’t know what you’d see. We don’t know how many asymptomatic viral shedders are out there.” As such, he advised extreme caution in using the rate—but being cautious about data, he added, “is my job.”  – The Altantic

Does Sheltering In Place Work?

Take a look at the Bay Area’s curve compared to the rest of the country.

The SF Bay Area (six counties) was the first to shelter in place on March 16th even with very few cases, only 138 in Santa Clara County, and almost no deaths.

Those charts are similar to the studies of 1918 Flu, which, say, compared the death curves of St. Louis, who locked down almost immediately after the first cases showed up, to those of Philadelphia, who finally got the memo about three weeks later.  See our post,  Meet Me In St. Louis Not In The Streets Of Philadelphia. 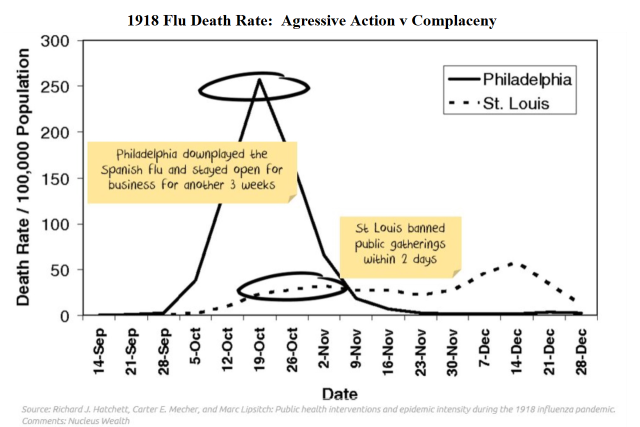 We own the future, folks.   Either we follow the scientific and medical community’s advice and try and shut this virus down ASAP by every American doing their patriotic duty or we follow our own conspiracies,  “Jesus is my vaccine” nutter, anti-Christian views, and let the political forces divide us.     That almost guarantees a prolonged depression.

Though the polls show overwhelming support for strict shelter-in-place measures, overwhelming in not enough.  We need almost 100 percent unanimous buy-in in from all the states.   As the video above illustrates, a little yeast can permeate the whole batch of dough.

We have a good friend who was wearing a face-mask at the grocery market in a northern mid-west state the other day encountered the mockery of some of the local shoppers,

“You are such a libtard.”

In our book, it’s always better to be a healthy and alive “libtard” than a sick and dead…whatever.  Death comes for libtards as well as the enlightened few and cannot be gaslighted.

We will share in a post soon about a conversation we had back in early February that confirmed to us the country was in deep shit.

This entry was posted in Coronavirus, Uncategorized and tagged Coronavirus, Depression, Economy. Bookmark the permalink.

11 Responses to America’s Bearish Day At The Beach