I am asking GMM readers to send thoughts, prayers, postive energy or whatever you got to our beloved Carol K., GMM’s Chief Money Printer, as she battles a serious illness in Boston.  She’s the best, we’re hoping for the best, and she deserves the best.  Godspeed, CK.

Great chart from our friends at Strategas, one of the best research shops on the Street. 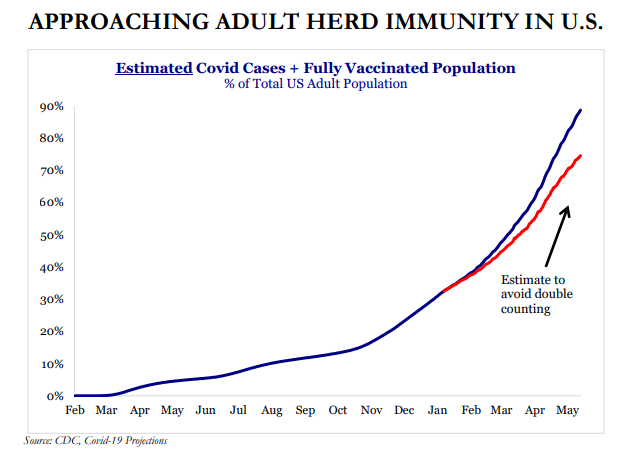 It looks fairly clear, at least to us, the U.S. has put the pandemic in the rear view mirror and is now ready to fully reopen the economy.

Recall our post in January, Is Peak COVID In?

We think so.  The daily new case curves are turning down and though the death curve will lag for a few weeks, it will also start to turn down soon.

We’ve put together some back of the envelope calculations in the following table based on simple assumptions that 5 percent of America’s population is currently infected, which drops the concurrent mortality rate down to 0.32 percent, very generous compared to the 2 percent estimate that holds with the conventional wisdom.

Using that mortality rate, assuming 60 percent of the American population is eventually infected,  the death toll will rise to 641,000, which puts us in about two outs in the bottom of the first in a nine-inning baseball game.  – GMM, April 25, 2020

We didn’t get all the math right but, very sadly nailed the estimate of the final pandamic death toll.   We projected U.S. deaths would rise to 641k from the then level of 53.4k, which invited a week of pushback, beatdowns and hate mail.

The final death toll is going to come in pretty close to our estimate. COVID related deaths in the U.S. are currently running around 601k.

History will write that many of the deaths could have been prevented and were the result of the country’s lack of leadership and toxic politics.  At the same, historians will look back at the almost miraculous creation of a vaccine less than a year after the breakout as a sign of America’s ingenuity.   Shameful but thankful.

This entry was posted in COVID, Economics, Uncategorized. Bookmark the permalink.