Great chart from Statista on which companies are at risk of getting hammered by social media ad boycotts.  GMM’s Coach C has been all over us about this one, and early,  selling and flagging the companies that will be hurt. 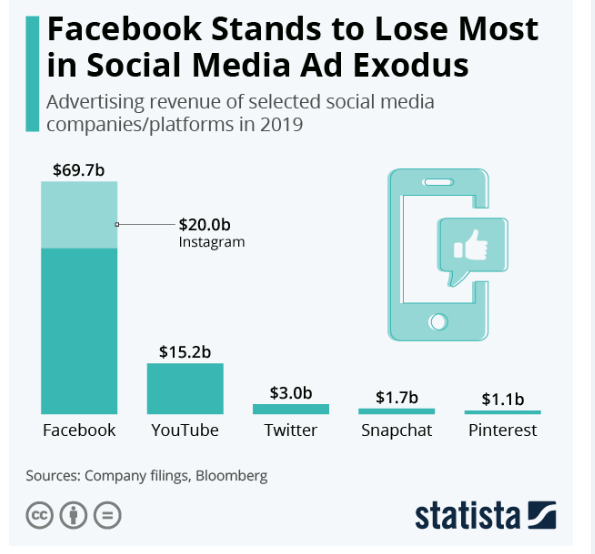 This is getting serious

A boycott of advertisers on social media is gaining momentum, and Facebook is the primary target. Marketers are expressing unease with how it handles misinformation and hate speech, including its permissive approach to problematic posts by President Trump.

Who’s doing what. The boycotts have followed a call by the advocacy group Stop Hate for Profit, which is keeping a running list of participating companies. Over the weekend, Starbucks and Diageo said they would pause advertising on all social media platforms. They’re among the biggest spenders on Facebook ads: Starbucks spent $95 million and Diageo $23 spent million on the platform last year. Other companies have boycotted Facebook specifically, including Honda America, Levi Strauss and Patagonia.

Who’s next? Procter & Gamble, the world’s largest advertiser, said it wouldn’t rule out a pause on Facebook ads. (Its big rival, Unilever, is stopping ads on Facebook, Instagram and Twitter through the end of the year.) Big ad agencies generally take their orders from clients, but they also have leeway to steer spending to certain platforms over others. – NY Times, Dealbook

Starbucks became the latest company to hit the pause button on social media advertising on Sunday, joining an ever-growing list of major brands that pulled their ads from social networks, and Facebook in particular, in an attempt to push for stronger action against hate speech on the part of social media companies.

“We will pause advertising on all social media platforms while we continue discussions internally, with our media partners and with civil rights organizations in the effort to stop the spread of hate speech,” Starbucks wrote in its official announcement of its decision, which puts the coffee chain alongside companies such as Coca-Cola, Unilever, Verizon, Patagonia and Levi’s, to name just a few. As opposed to the other companies mentioned above, Starbucks hasn’t officially joined the “Stop Hate for Profit” initiative, which singles out Facebook for its inaction against hate speech especially during the recent protests for racial justice in America.

While several companies have paused social media advertising altogether, Facebook is currently taking the brunt of the boycott, as it is seen as the epitome of what is wrong with social media these days. As our chart shows, the company’s ad revenue amounted to nearly $70 billion last year, dwarfing the ad sales of its social media competitors. – Statista