We have always maintained that to reopen the economy was a false choice unless the public had confidence the virus had been contained. 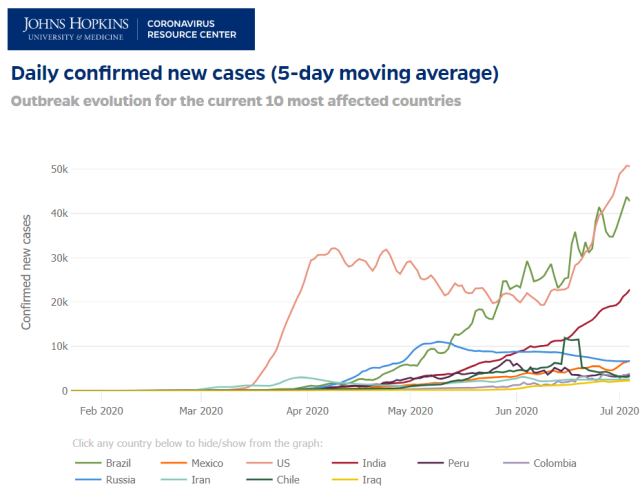 The U.S. is losing control of the COVID crisis due to the colossal failure of leadership by the Administration.  Sure, deaths are way down but they lag the new case count by around two to four weeks.  If the market rally is based on the lower death count, then it should be a short lived rally. 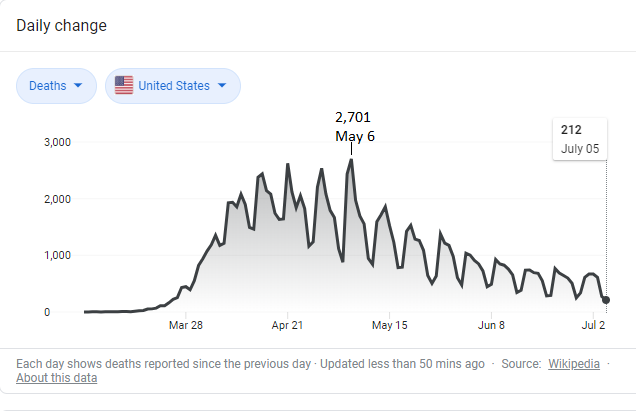 The weekly seasonality in the data must have to do with how it is reported.

The Coronavirus is very much under control in the USA. We are in contact with everyone and all relevant countries. CDC & World Health have been working hard and very smart. Stock Market starting to look very good to me!

If the economy is “reopened” next week, will the stock and bond market bubbles reinflate?   Will the unemployment rate move back to below 4 percent?

If people are afraid that the invisible enemy is still among us,  the economy has zero hope of recovering and the country should prepare itself for a long drawn out recession or even depression.  Forget about productivity, which is the ultimate driver of long-term economic growth.

Only if most of the public has confidence COVID-19 has been dealt a fatal blow can a robust economic recovery even be considered a possibility. – Is America Already Waving The White Flag?, GMM, March 23rd

The U.S. could have done so much better yet here we are morphing into a failed state and a Third World Country.   We needed a national plan to reopen and strong leadership at the Federal level but only got, at best,  mixed messaging and political polarization.

None, nada, just more Potemkin noise, the hallmark of this administration, coupled with massive gaslighting.  It’s up to the Governors now to get it right and land the plane.

The Trump campaign strategy now seems to be keep whiping up the base and try to even…wait for it…. gaslight death. Don’t think it is gonna work on both counts.  – GMM, April 21st

Baseball Players Not Even Comfortable

Here’s Mike Trout, who is on his way to becoming the GOAT of baseball.

"We’re risking our families and our lives to go out there and play for everyone." – @MikeTrout https://t.co/ctN7ZkUGXW

Buster Posey of the Giants,

.@SFGiants catcher Buster Posey, checking into summer camp at Oracle Park on Saturday, said he talked to his wife during the shutdown about opting out of the 2020 season and left open the possibility that he still might, based on coronavirus developments. https://t.co/G8lCju0rCX

Listen to Sean Doolittle of the Washington Nationals,

"We need help from the general public. If they wanna watch baseball, please wear a mask, social distance, keep washing your hands."

Sounds like baseball may not even happen this year.  Sad.

Where will the country be without their circuses?

What Is a Failed State?

People use this expression to indicate a political entity whose government has ceased to perform most or all of its basic functions. Such a condition can result from civil war, untrammeled corruption, natural disaster, or some combination of those and more. The Fund for Peace, which has been working on such issues for more than 70 years, lists four criteria to identify such a country:

I’ve always thought of such fallen lands (sometimes given a fatal shove by my own government) as far-away places. Countries like Libya. The Fund for Peace identifies that beleaguered and now fractured nation, where rival armed forces compete for primacy, as the one in which government fragility has increased most over the last decade. The present chaos began when the United States and its NATO allies stepped in militarily, precipitating the overthrow of autocrat Muammar Qaddafi, with no particular plan for the day after.

Then there’s Yemen, where Washington’s support for the intervention of Saudi Arabia and the United Arab Emirates only exacerbated an ongoing civil war, whose civilian victims have been left to confront famine, cholera, and most recently, with a shattered healthcare system, the coronavirus. And before Libya and Yemen, don’t forget the Bush administration’s disastrous 2003 invasion of Iraq, which damaged that country’s physical and political infrastructure in ways it is now, 17 years later, starting to dig out of.

So, yes, I’d known about failed states, but it wasn’t until I read “We Are Living in a Failed State” by George Packer in the June 2020 Atlantic magazine that I began to seriously entertain the idea that my country was bouncing down the same flight of stairs. As that article’s subtitle put it: “The coronavirus didn’t break America. It revealed what was already broken.”  – Common Dreams