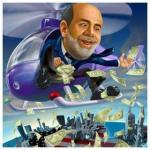 Wow!  Sounds a lot like what the President and Congress just negotiated, no?  Tax cuts financed by QE2 and a possible QE3?  Break out the Apaches!

Here is the excerpt from his famous  helicopter speech, given at the National Economist Club of Washington, D.C. on November 21, 2002.

Fiscal Policy
Each of the policy options I have discussed so far involves the Fed’s acting on its own. In practice, the effectiveness of anti-deflation policy could be significantly enhanced by cooperation between the monetary and fiscal authorities. A broad-based tax cut, for example, accommodated by a program of open-market purchases to alleviate any tendency for interest rates to increase, would almost certainly be an effective stimulant to consumption and hence to prices. Even if households decided not to increase consumption but instead re-balanced their portfolios by using their extra cash to acquire real and financial assets, the resulting increase in asset values would lower the cost of capital and improve the balance sheet positions of potential borrowers. A money-financed tax cut is essentially equivalent to Milton Friedman’s famous “helicopter drop” of money.

You think the Chinese and other central banks holding $6 TRN of dollar foreign exchange reserves  feel duped or “spammed?”  Hey, it’s not his job to worry about foreign central banks, but no wonder gold is at record highs and heading north!  Bubble, schmubble!

Another nugget from the speech,

What has this got to do with monetary policy? Like gold, U.S. dollars have value only to the extent that they are strictly limited in supply. But the U.S. government has a technology, called a printing press (or, today, its electronic equivalent), that allows it to produce as many U.S. dollars as it wishes at essentially no cost. By increasing the number of U.S. dollars in circulation, or even by credibly threatening to do so, the U.S. government can also reduce the value of a dollar in terms of goods and services, which is equivalent to raising the prices in dollars of those goods and services. We conclude that, under a paper-money system, a determined government can always generate higher spending and hence positive inflation.

There is a growing risk the Fed loses all credibility, which will be an unmitigated disaster.

Related Articles
Helicopter Ben gets in a spin – Economist
Monetary and fiscal policy, working together – Economist