“Nowhere does history indulge in repetitions so often or so uniformly as in Wall Street.” — Edwin Lefèvre,    Reminiscences Of A Stock Operator

The above was cited in an article in this month’s Technical Analysis of Stocks and Commodities titled Chart Analog Scenarios.  Check it out, it’s a good read.

We also like to look at chart analogs.   Recall the markets obsession with Doug Short’s Mega-Bear Quartet (see below) during the downtrend.  Everyone and their mother thought we were tracking the 1930’s almost tick-for-tick.   Paul Tudor Jones made a killing trading the 1987 stock market crash with 1929 analog, so money can be made and they can’t be dismissed so casually.

The Presidential Stock Cycle is pretty powerful analog, especially the third year of the first Presidential term, which we have analyzed in an earlier post.   Click here to view the post. 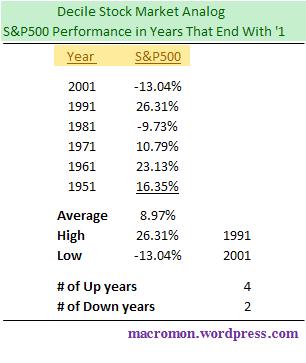 Traders and investors like to look at all kinds of analogs.  We’ve looked at a decile analog, the S&P500’s performance in years that end in ‘1, from 1951 to 2001.  The table shows the index has returned and annual average of 8.97 percent from 1951 to 2001, with four up years and two down years.  The average distorts the individual year returns as the market has been either up double digits, or down close to double digits.  In two of the up years, the S&P returned over 20 percent.

The S&P500 predicted performance chart, which is an extrapolation of average daily returns is interesting as it reflects all the traditional seasonality trends:  1) a January to May rally of 7.10 percent;  2) a “sell in May and go away” 6.17 percent, which bottoms in late September; and 3) a Q4 year-end rally of 8.26 percent.

Of course, the S&P500 won’t play out 2011 tick-for-tick as the chart predicts.  Furthermore, the chart is not a true analog as it averages daily returns for the six years.

It does illustrate, however, years that end in ‘1 exhibit strong traditional seasonality.   This year may be different, nobody knows.   We do place stronger — but not full — confidence in the Presidential Stock Cycle analog as there is not only more observations, but at least some fundamental explanation of its significant stock market outperformance.

This entry was posted in Charts, Equities and tagged S&P500, Stock Chart Analog. Bookmark the permalink.