First a disclaimer.  You know our confirmation bias on Apple. We think it is the best company in the world, the Five Star General of this bull market, and the leader in the new wireless/app driven global economy.  We recognize we’re prone to seeing bullish signals for Apple in cloud patterns if we stare at them long enough.   But,  we’ve traded a fair share of the stock and have noticed, illustrated in the chart, that certain candlestick patterns often signal a big move.

After bouncing twice off the closing low of $330 of this correction,  today’s price action generated a bullish hammer candlestick pattern, which usually resolves itself in a bullish fashion.   We’re not betting the ranch and the pattern does need confirmation.   The next few trading days into expiration will be a big test and if the stock can close above $340,  the shorts are going to start sweating razor blades as we move closer to the April 20th earnings release.  All bets are off with a close below $330, however.  (click here if chart is not observable) 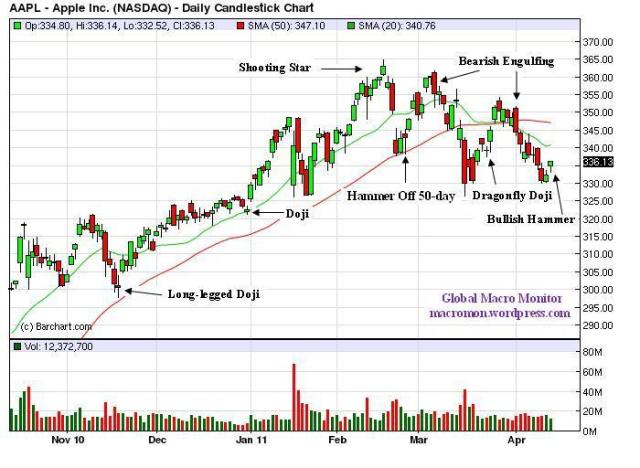 This entry was posted in Apple and tagged Apple, Bullish Hammer, Candlestick. Bookmark the permalink.