Gold is the New Deutsche Mark

We point you to our piece posted last month here at the Global Macro Monitor,

Gold is creeping higher as many believe it is the only place to hide.  Cash gold is near its all-time closing high of 1563.20 on April 29th and closing in on its May 2nd intraday high of 1575.10.   We find it interesting many want to sell it here just at the time a perfect storm is brewing for the yellow metal.

If the situation in Europe continues to deteriorate,  our bet is gold goes parabolic as the ECB will have no choice but to crank up the printing press to backstop the financial system.  There is already talk of the ECB buying sovereign bonds.   Rather than hanging on to their Euros or buying dollars,  gold could and should be the first choice of capital flight from Europe.   Gold is extremely difficult to trade as it really has no clear valuation metric and moves, primarily,  on the second derivative of the perception of future monetary policy.   We may be wrong and remain disciplined.

We’re not taking a victory lap here but think gold is now in the midst of a massive repricing as a legit global currency/store of value.  Central banks are buying even at prices north of $1,500 per ounce.  These are strong hands and not the flippers that can take it down $200 in a nanosecond.

The main risk we see to gold in the short term is that its gains could be tapped for margin calls to cover bad positions by, say,  the levered set or other stressed institutional investors.   A spike in real short term interest rates due to sovereign credit concerns in the major countries, for example,  is another major risk, but we don’t this as an issue for sometime.

The loss of faith in the leadership in Europe and the U.S. — we stress in both political parties — should keep gold well bid.   Coupled with the prospect of more monetized bank runs in Europe and declining faith in the long-term prospects for the Euro,  gold is becoming the new Deutsche Mark, at least for now,  and this with our usual disclaimer that we could be wrong.

It’s time for Washington to discard politics and start leading.  The prospects for economic growth grow bleaker as each dollar and euro flees to gold.   Everyone must pitch in and sacrifice in a long term plan to fix the deficit and address the structural issues which are keeping employment weak.  The Europeans need to quickly overcome the institutional constraints that are preventing their leaders from taking bold and decisive action to address the crisis that could take down even some of the core European economies.   This is China’s moment to show the world its ready and willing for a global leadership role.   No more dithering while the global economy burns.   Just do it. 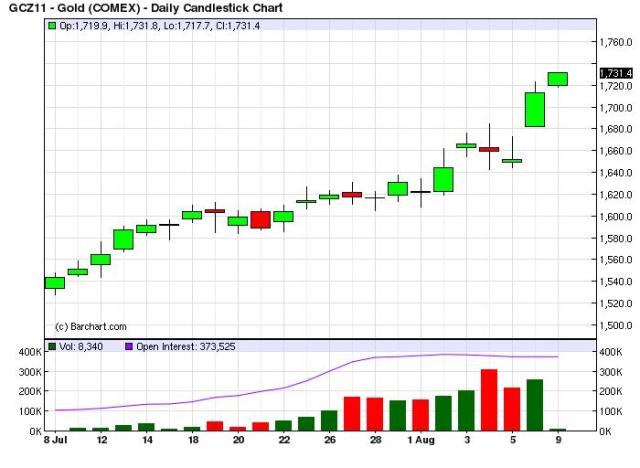