Great data from Japan’s Ministry of Finance (MOF) showing the sharp drop in exports to each of the country’s major trading partners.

TOKYO — Japan’s trade deficit widened in September as exports plunged 10.3 percent from a year earlier, weighed down by Europe’s debt crisis and a surge in antagonisms with China that have damaged close economic ties.

The deficit for the month was 558.6 billion yen ($7.2 billion), the Finance Ministry said Monday, higher than the forecasts of many analysts and bigger than a deficit of about $3.7 billion a year earlier. The deficit in August was $9.6 billion…

The strong Japanese yen has hurt the country’s export competitiveness, while demand has evaporated as growth slowed in most regions. Exports of consumer electronics, a mainstay, fell by double-digit figures from a year earlier.

Resource-scarce Japan is almost entirely dependent on imported fuel, and it has long relied on robust exports of high-value consumer goods and industrial products such as machine tools to help counter the cost of importing its energy needs.

With most of the country’s nuclear plants shut down, manufacturers and utilities have increased their reliance on traditional energy sources such as oil and gas, while stepping up conservation and investments in renewable energy.  –  AP 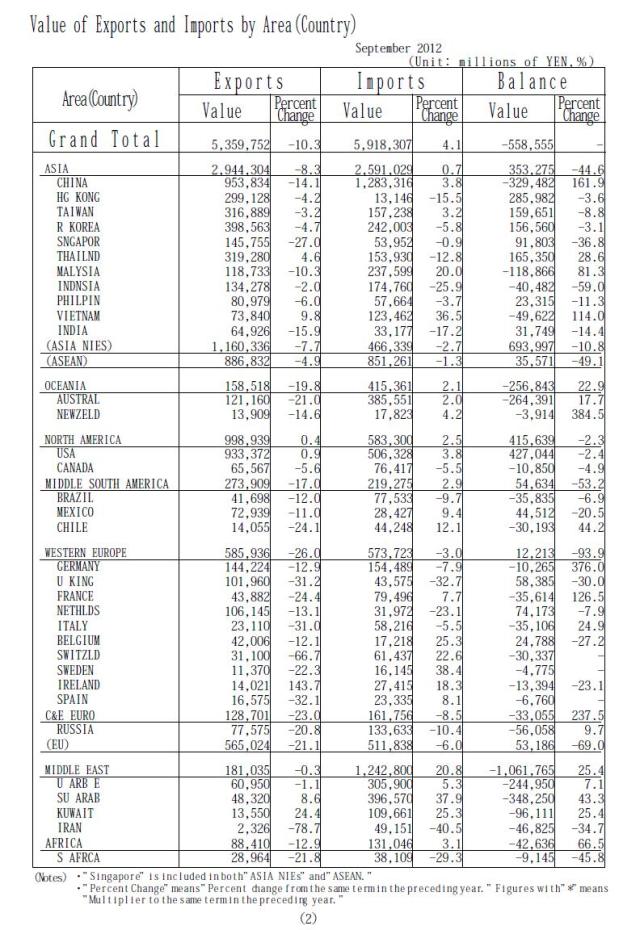