Greece Is The Word….And A Done Deal

After the Eurozone’s failure to conclude a Greek deal last week, we posted

So the hangup is not over whether there will be a deal, but what type and how much debt relief Greece will be granted by the official sector.   That is, how long will maturities be extended and what will be the haircut on interest rates.   Will the debt relief  be phased in and conditional on Greece staying in their economic program?   These issues take time to debate, come to a consensus, and then translated into a head of terms.

The Eurozone and Greece came to an agreement over the latest financial package, which includes debt relief.  They are holding a press conference as we post.

Is the deal going to solve all Greece’s problems and lead the country into the economic promise land?   Of course not, but it buys some time,  removes uncertainty, and takes Greece tail risk off the table, at least for the time being.

Here is the IMF statement:

Ms. Christine Lagarde, Managing Director of the International Monetary Fund (IMF), made the following statement at the conclusion of the Eurogroup meeting in Brussels today:

“I welcome the initiatives agreed today by the Eurogroup aimed at further supporting Greece’s economic reform program and making a substantial contribution to the sustainability of its debt. This builds on the significant efforts by the Greek government to carry forward its fiscal and structural reform agenda.

“Taken together, these measures will help to bring back Greece’s debt ratio to a sustainable path and facilitate a gradual return to market financing. The debt ratio is expected to decrease to 124 percent of GDP by 2020 through significant upfront debt reduction measures of 20 percent of GDP. In addition, I welcome the commitment by European partners to bring back Greece’s debt to substantially below 110 percent of GDP by 2022, conditional on full implementation of the program by Greece. This represents a major debt reduction for Greece relative to its current debt trajectory.

“Once progress has been made on specifying and delivering on the commitments made today, in particular implementation of the debt buybacks, I would be in a position to recommend to the IMF Executive Board the completion of the first review of Greece’s program.”

Here is the Guardian on the deal,

• A lowering by 10 bps of the guarantee fee costs paid by Greece on the EFSF loans.

• An extension of the maturities of the bilateral and EFSF loans by 15 years and a deferral of interest payments of Greece on EFSF loans by 10 years. These measures will not affect the creditworthiness of EFSF, which is fully backed by the guarantees from Member States.

• A commitment by Member States to pass on to Greece’s segregated account, an amount equivalent to the income on the SMP portfolio accruing to their national central bank as from budget year 2013. Member States under a full financial assistance programme are not required to participate in this scheme for the period in which they receive themselves financial assistance.

And here is the market going Greek, 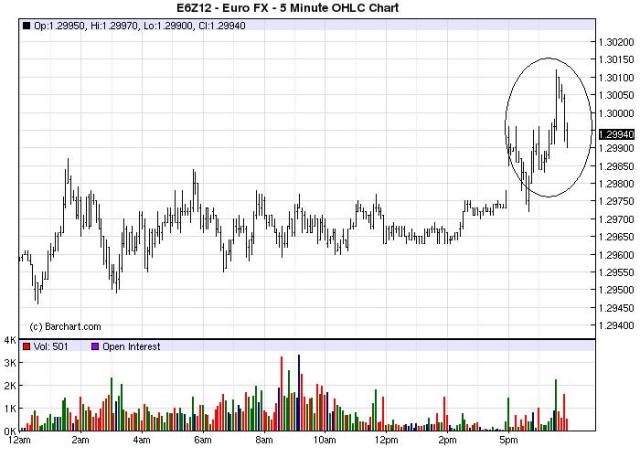 This entry was posted in ECB, Euro, PIIGS and tagged bailout, Greece, OSI. Bookmark the permalink.

1 Response to Greece Is The Word….And A Done Deal