The Fed and Credit Rationing

So if investors are told by the Fed that the short-term rate is going to be close to zero in the future, then they will bid down the yield on the long-term bond. The forward guidance keeps the long-term rate low and tends to prevent it from rising. Effectively the Fed is imposing an interest-rate ceiling on the longer-term market by saying it will keep the short rate unusually low.

The perverse effect comes when this ceiling is below what would be the equilibrium between borrowers and lenders who normally participate in that market. While borrowers might like a near-zero rate, there is little incentive for lenders to extend credit at that rate.

This is much like the effect of a price ceiling in a rental market where landlords reduce the supply of rental housing. Here lenders supply less credit at the lower rate. The decline in credit availability reduces aggregate demand, which tends to increase unemployment, a classic unintended consequence of the policy.

We have been asking who in their right mind would lend long-term money in the current repressed interest rate environment and have likened the Fed’s attempt to manage long term rates to rent control.    See here and here.

The bond market is so distorted by QE and the huge holdings of the FED and foreign central banks that long-term interest rates are meaningless as a signal of information.

We also suspect those businesses who can borrow freely at the long term rate are investing in labor saving capital as the relative price of capital to labor has also been distorted by monetary policy.

The Bernanke Fed deserves a gold medal for avoiding an economic black hole, which would have made the Great Depression look like a walk in Central Park.  That is, they have stabilized the situation.  Structural reform, a necessary condition to move the economy to a sustainable trajectory,  doesn’t even seem to be on the radar.

Here’s a chart we created more than a year ago, which illustrates our and John Taylor’s concerns. 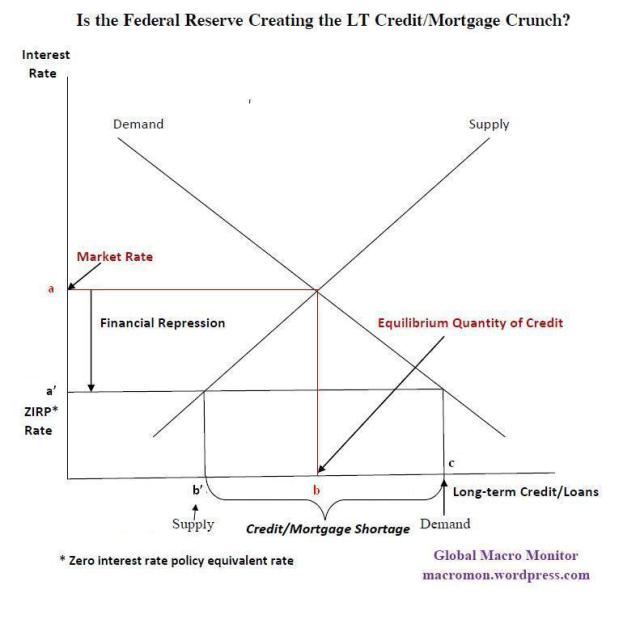