The Clash of Generations Cometh

The Times They Are a-Changin’,

Come mothers and fathers
Throughout the land
And don’t criticize
What you can’t understand
Your sons and your daughters
Are beyond your command
Your old road is rapidly agein’
Please get outta’ the new one if you can’t lend your hand
For the times they are a-changin’  –   Bob Dylan, 1964

It will be 6 years on March 1st since we wrote and posted,  Connecting the Dots: The Coming War Between Generations.   We wrote back then,

It doesn’t take a C.I.A. analyst with a Ph.D. to realize the potential for political blowback when one generation is rendered into servitude due to the excesses of another.   Or does it?  – Global Macro Monitor

We also cited Thomas Friedman a few months later in our piece, The Clash of Generations,

What we are witnessing in the Middle East where the young, who have little or no political voice and a not so bright future are throwing off their autocratic gerontocracies at an incredible pace.   Something similar will manifest here and the rest of the aging west, though probably in different way, when younger generations realize the consequences of being saddled with a massive debt and declining public services as the tax revenues are diverted to debt service and retirement benefits.   Not to mention the world full of carbon they have inherited.
– Thomas Freidman,  NY Times,  July 16, 2011

The previous generation stealing from their grandchildren. https://t.co/ylA1mYaFVu

A retweet of this: 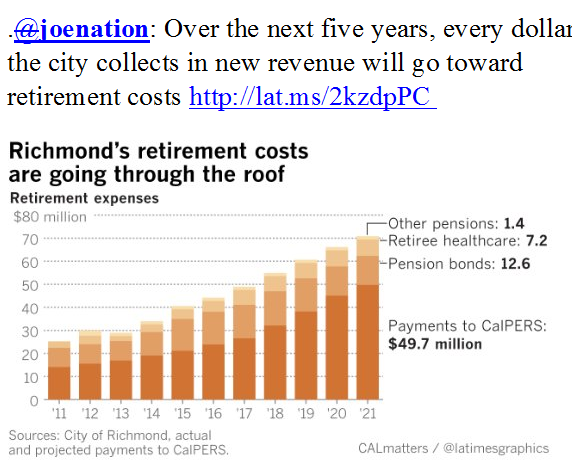 The chart is from a LA Times article from a few days ago titled,  Cutting jobs, street repairs, library books to keep up with pension costs,

The truth is that there are cities all over the state that just aren’t owning up to all their problems,” said San Bernardino City Manager Mark Scott.

Increasingly, pension costs consume 15% or more of big city budgets, crowding out basic services and leaving local governments more vulnerable than ever to the next economic downturn.

Stunning:  “Every dollar the city [Richmond, CA] collects over the next five years will go toward retirement costs.”

We just had a presidential election that resulted in the biggest political disruption in U.S. history bringing a “so-called” disrupter to the White House.  All because a certain segment of the population was hurt by international trade —  77,744  voters to be exact,  in Michigan, Wisconsin, and Pennsylvania, the marginal votes that led to President Trump’s electoral college victory.

Imagine when the younger generations have their epiphany that they have been screwed by the baby boomers?

Richmond is only the tip of the iceberg and this ugly story is being played out across the nation and the world.

Here is one example of a milquetoast approach to solve the problem,

The California Public Employees Retirement System, or CalPERS, voted in December to lower the pension fund’s discount rate—the projected annual investment returns for future years—from 7.35 percent to 7 percent, in two steps that will occur between now and 2020. It’s a modest adjustment and one that leaves the fund with a discount rate that still might be too high, but even that small change is going to add billions to the state’s annual pension tab.

Last week, the California State Teachers’ Retirement System, or CalSTRS, followed suit, announcing plans to lower the discount rate from 7.5 percent to 7 percent over the next two years.

…Taxpayers will be hit hard by the change. Bloomberg, citing data from the California Finance Department, says the share of pension costs paid by state taxpayers will triple in less than a decade and might increase further if investment returns under-perform the 7 percent threshold.   – Reason.com

Come on,  let’s stop dicking around about the discount rate, just as they do in climate change debates, and fix the problem.   Public sector pension payments are going to have to be restructured.  Punto!

We say this not because we want it to happen but because there is no other choice, it has to happen.

Some already have, by the way, as they are in the private sector.  We need to move quickly lest the millennials rise up and march the retiring baby boomers off the cliff as they see their taxes raised and public services being cut.

We suspect one big theme in the 2020 presidential election?   The “Clash of Generations” and we don’t think the younger voters will cast their ballot for a Caspar Milquetoast.  We just witnessed in November what happens when voters are angry at their government — anything can happen. 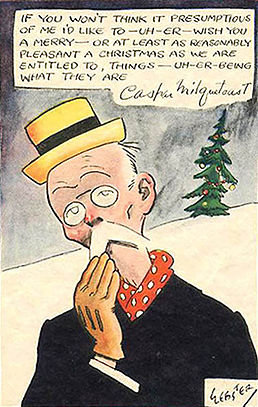 Stay tuned.  We have lots more to say on this.   Prepare for blowback.

This entry was posted in Politics and tagged Clash of Generations, Public Pensions. Bookmark the permalink.

19 Responses to The Clash of Generations Cometh