The question is:  Has the aircraft carrier of rising global inflation finally left port?

Even China has reversed its deflationary forces. 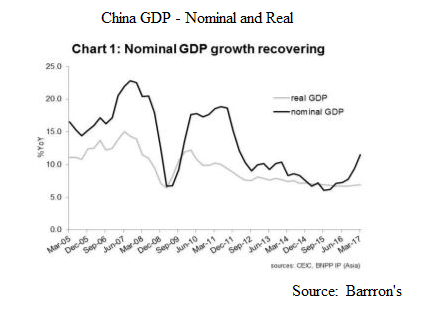 You know when aircraft carriers build up a head of steam,  they are difficult to turn and slow down.  I once read that “it took  4 nautical miles at full reverse to stop the carrier”, USS Forrestal.

But, we have no doubt, central banks are going to allow inflation to run hot for awhile.   Beats and easier to contain than deflation.   That is until they panic.

The return of inflation a new market theme?  Stay tuned.

Euro zone inflation jumped to 1.9 percent in April from 1.5 percent in March driven by energy prices, flash data showed Friday. Inflation is now at its highest level since 2013.

The biggest increase among the main components was seen in services, which rose to 1.8 percent from 1 percent in March. – CNBC

This entry was posted in Euro, Fiscal Cliff Monitor, Inflation/Deflation, Uncategorized, US Releases and tagged Europe, Inflation. Bookmark the permalink.