Volatility Returns (to the NASDAQ)

At around 2 pm (New York) Friday, we see the Nasty (NASDAQ 100 futures) trading down over 3 percent and the Dow and S&P500 relatively flat.  The FANG stocks, including Apple, were getting shellacked

I recall a few weeks ago a prominent strategist saying on CNBC that Apple was the closest thing to risk-free in the market.  The FANG trade is more crowded than Oakland’s Oracle Arena will be on Monday night, Game 5 of the NBA Finals.

Dipping Our Toes In
Nevertheless,  we thought we’d give it the old college try,  venturing out of commodites (that is where the volatility has been), which has been a disaster for us this year, to trade the Nasty into the close,  both long and short.

Not every trade was profitable and it was one helluva a ride, but, in the end, we made some cheese.  The index ended the last hour and a half gapping around 30-60 points at a time in just few minute intervals.   It’s been hard making money this year in commodities and it was nice winning a few rounds from the Algos, for once.

Overall Volatility Still Low
The NASDAQ ended down around 1.8 percent on the day, the Dow and Russell were up 0.4 percent and the S&P500 was flat to down a bit.   The VIX closed  up at 10.7.

A consensus seems to be buiding the Trump trade — industrials,  materials, banks, and energy stocks — is back on.    Is the the growth scare over?   Watch this space.

Trump Trade Returns
We believe, and so seems the market, the James Comey testimoney on Thursday was Trump positive (or not that negative — i.e., no schmoking gun) and that Republicans are kicking into the “two-minute” drill.    That is they are now in hurry up mode to pass legistlation as they realize the political guillotine looms in Novemeber 2018 and could potentially cost them both houses of Congress.

Crash Coming?
There is just too much global liquidity for asset markets  to correct on a general basis, in our opinion.

Not until central banks start draining the swamp.  Furthermore,  Mario Draghi sounded more dovish than Saint Francis of Assisi at Thursday’s ECB meeting.   And, remember,  “John Bull will still be able to stand many things but won’t stand for 1 percent.  Or was it 2 percent?

The global flood of money has to go somewhere  until its starts being removed from the financial system through central bank balance sheet reduction.   And we believe the tipping point on policy interest rates for the markets is 3 percentish, but the Fed will be reluctant to take it there as it will have a deletrious effect on the U.S. budget deficit. Higher interest rates equate to higher interest payments on the national debt and crowding out of other discretionary spending programs.

Don’t want to enter that ugly positive feedback loop, which will be the beginning of the end for the debt supercycle and could result in enornous political stress.

Fall Correction
However, beware the ides of October.

The Fed may start draining the swamp in the fall , i.e., reducing their balance sheet and, thus,  the monetary base;   and China’s  Communist Party Congress wil conclude, which may clear the way for a policy or an economic surprise.

Those wanting to get long should have a nice opportunity to do so when the leaves turn brown and gold in the autumn.

Conclusion
Finally,  remember comrades, just like everyone else, we can’t predict the future and may be completely wrong.   Flexible conviction is all the rage.

And all of the above are just our opinions,  and you know what they say about opinons.   They are like arses, everyone has one.   Some are developed more riguously than others, and some may look  better than others. 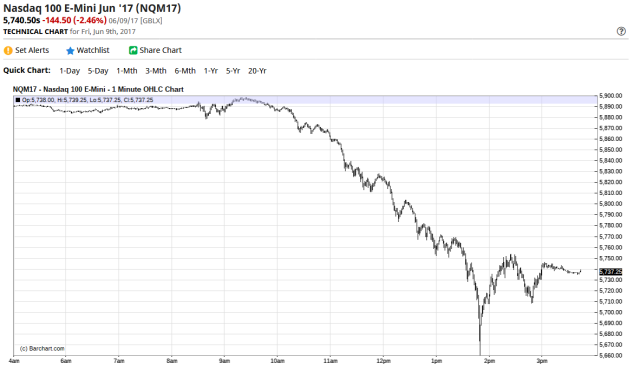