Transports And North Korea On The Radar

On August 1st we warned in our post, Watch This Space – Industrials v Transports, to monitor the Dow Industrials-Transports divergence:

Not as relevant as it used to be,  but something to keep on your radar.  Transports approaching 200-day moving average at 9,117.59 [corrected on Aug. 19] and diverging from Industrials..
– GMM

We also posted this chart:

The Trannies peaked on July 14th; are down 6.85 percent from that high;  have closed two consecutive days through its 200-day moving average for the first time since July 2016;  though only currently about 1 percent below the 200-day.

The Dow Industrials index peaked on August 8th and is down just 2.28 percent from the high.   The S&P500 has already aready pierced its 50-day, the Dow remains a little over 50 points above its 50-day moving average. 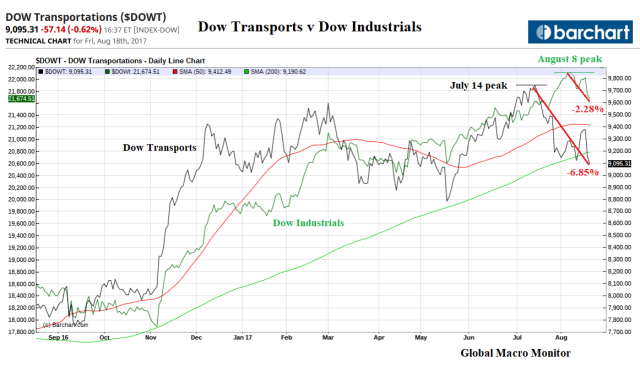 What is surprising is that the Transports and Industrials parted ways during the calmest three-week period in S&P500’s history.

Here’s to another record for 2017, as the past 15 trading days have officially marked the calmest stretch in the history of the S&P 500 Index. Per Ryan Detrick, Senior Market Strategist, “As amazing as this is to say, the S&P 500 hasn’t closed more than 30 basis points up or down for a record 15 consecutive days. Even in the face of heightening geopolitical tensions, we are in the midst of the calmest three-week period in history.”  – LPL Research, August 10, 2017

Markets are always complacent and ignore event risk during bubblicous and extremely loose financial conditions, until they don’t.

We also noted the ripping South Korean stock market and currency in our July 24th post,  No Worries In The South Korean Markets,  even as the missiles were flying one after another all throughout the year just 35 miles to north of Seoul.

We have been writing a lot these days about how crude oil is not pricing any geopolitical risk of a very messy Middle East.  See here and here.

That’s nothing, however,  compared to the performance of the South Korean stock market and currency, year-to-date,  given the geopolitical risk of the many North Korean missile tests fired off in the first seven months of 2017 (see timeline below).    The KOSPI stock index is up 21 percent and the currency has strengthened a little over 7 1/2 percent against the dollar.

Oh, by the way,  Korea also impeached and removed their president earlier this year,  had a presidential election, and has also been put on a currency manipulation monitoring list by the US Treasury.

…Is this the definition of “climbing a wall of worries”, complacency, or just a bullet proof bull market? We vote for capital flows seeking emerging markets.
– GMM, July 24, 2017

Ironically, the South Korean Kospi stock index peaked on the date of our post and proceeded to decline around 6 percent before recovering a few hundred basis points in the last week as worries over the nuclear crisis subsided, at least temporarily.  The dollar has gained about 2 1/2 percent against the Korean won since July 24th.

The markets will be watching North Korea with a keen eye this week as the U.S. and South Korea begin their annual war games on Monday, which included 25,000 American and 50,000 South Korean soldiers last year.   The NY Times reports very provocative posters have gone up in North Korea over the past week.

“What is typical in these posters is the image of an undaunted, fierce North Korea that is not fazed by the moves by the United States or the United Nations,” Koen de Ceuster, an expert on North Korea at Leiden University in the Netherlands, told Reuters.

…Countries use various signaling techniques in times of crisis, experts in geopolitics say, including diplomacy, back-channel talks and public messaging. The North is clearly sending a message with these posters.

…For now, the war of words has been muted. But a potential inflection point looms. On Monday, American and South Korean troops will begin annual large-scale war games — the first since the North test-fired missiles that might be able to reach the United States mainland.  – NY Times, August 19

There’s no military solution here; they got us.”

“Until somebody solves the part of the equation that shows me that 10 million people in Seoul don’t die in the first 30 minutes from conventional weapons, I don’t know what you’re talking about,” Mr. Bannon said in a phone call with Robert Kuttner, The American Prospect’s co-editor.   – NY Times, August 17

There’s media speculation that the allies might try to keep this year’s drills low-key by not dispatching long-range bombers and other U.S. strategic assets to the region. But that possibility worries some, who say it would send the wrong message to both North Korea and the South, where there are fears that the North’s advancing nuclear capabilities may eventually undermine a decades-long alliance with the United States.

“If anything, the joint exercises must be strengthened,” Cheon Seongwhun, who served as a national security adviser to former conservative South Korean President Park Geun-hye, said in an interview.

…It’s almost certain that this year’s drills will trigger some kind of reaction from North Korea. The question is how strong it will be. – NY Post, August 19

Stunning to think, at least to us, with such ubiquitous event risk on the horizon that global markets were so calm over the past few months.  Until they weren’t.

We’re not taking any victory laps here.   We, along with everyone else, have no idea what the future holds.  The market could crash next week or rip to new all-time highs.

The Trannies could rebound big, the North Koreans could remain calm during the joint military exercise (doubt it),  and President Trump could name Gary Cohn to replace Janet Yellen as the Fed Chairman, not inconceivable if markets continue to decline.   Or not.

The major stock indices are only 2-3 percent off their highs.  Nothing.

The one big lesson we’ve learned this year, however, is the best short-term bet is to usually take the opposite side of how the majority of the fast money is positioned.  We don’t have that information, however.

But, the markets are looking  increasingly vulnerable to event risk, of which we see many through October:  1) seasonality;  2) the Fed balance sheet should, or could start shrinking;  3) China’s Party Congress may have concluded, removing the country’s implicit policy put, and thus increasing the risk of a China policy or economic shock;  4) the new U.S. Federal government fiscal year begins October 1 and if the Trump administration has not passed any significant economic legislation, the markets may begin to throw in the towel;  5) there will be more clarity on ECB tapering;  6) potentially even more elevated asset prices if the risk markets recover and grind to new highs through the rest of summer;  7) nervousness over the debt ceiling;  8) more political instability;  and  9) North Korea.

What We Are Watching Next Week

1) Dow Transports.  Since the Trannies led the sell-off it is number one our list.

Per Ryan Detrick, Senior Market Strategist, “Going back in history, we have often seen the rare combo of a 52-week high in the Dow and a 52-week relative low in transports precede some tumultuous times. It took place ahead of the ‘73/’74 bear market, the ’87 crash, and the ’00 peak for starters, which makes the signal seen earlier this month something we aren’t taking lightly.”

Now here’s the good news: The track record of this rare signal is far from spotless. Per Ryan Detrick, “Although on the surface this sounds scary, looking at all the signals (to remove clusters, each instance must be at least three months apart to define a new signal) in which the Dow and Dow/transports spread hit new 52-week highs, the Dow has been up a median 17.1% over the following year. We’d still say the weakness in transports is a concern, but a bigger concern is that we’ve gone more than a year without a 5% correction, and there are multiple big events (think debt ceiling, tax reform, and infrastructure spending) out of Washington on the horizon that could trip up the market.”  – LPL Research, August 16 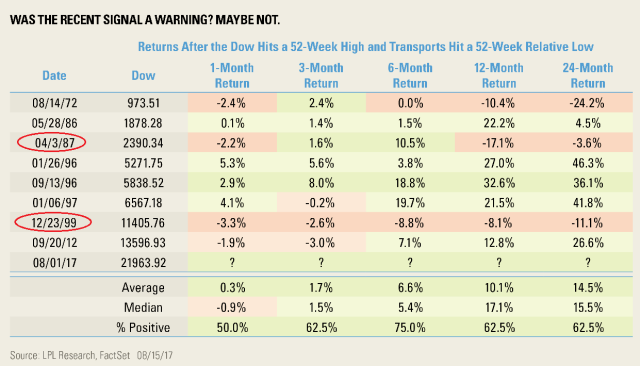 2)  North Korea.   Will Kim Jong Un test President Trump?   If he does, will President Trump back down?   War is a low probability, but extermely high impact event.   Not enough fear priced.  We hope and pray for de-escalation.

Pressure is mounting on the world’s central bankers to give more clues about how they intend to exit huge stimulus packages unfurled to dig the global economy out of a hole after the financial crisis. After a decade of low-interest rates and bond buying, a process known as quantitative easing, the Jackson Hole summit could be a platform to convince markets they can safely wean the world off cheap money.

…The Fed chair, Janet Yellen, is the first leading figure to speak at the event on Friday, followed by Draghi later that day.  – The Guardian, August 20

Finally,  we recognize the global economy seems to be gaining some traction,  global interest rates remain extremely repressed,  the BoJ and ECB are still buying assets, the global financial system overfloweth with central bank money,  investors like to make money and are forced to chase yield and returns,  and the markets are chock-full of buy the dipper algos.

Ergo, no bear market until the above conditions change.

A Tower of Terror flash crash sometime around October to be bought?   We increasingly think so.  The option value of cash will increase significantly in the autumn.

1 Response to Transports And North Korea On The Radar