The Bank of International Settlements (BIS) is out with a very interesting piece, Why so low for so long? A long-term view of real interest rates?, by Claudio Borio, Piti Disyatat, Mikael Juselius and Phurichai Rungcharoenkitkul. The basic premise is that monetary regimes rather than real variables — such as savings-investment balances, GDP slack, demographics and dependency ratios — drive real interest rates over the long-term.  In addition, that global real interest rates have become increasingly correlated over time.

Though far from conclusive, the paper confirms our long-held suspicions. Recall what we (econ graduate students) were taught in the university?  That money and the monetary sector are a “veil” and have almost no lasting impact on real economic factors.  That paradigm is why macroeconomics failed so miserably to predict the Great Financial Crisis (GFC), our friends.

We don’t have the time to give you a detailed description of the piece, so click on the above url and read it.  A little wonky with lots of regressions but it is well worth your time.

Nevertheless, here is a synopsis and some nice charts and the article’s money quotes.

Graph 1 shows the time series of global real interest rates, captured by the cross-country median. We see that real rates of both long and short maturities tend to co-move closely, although short-term rates are naturally more volatile. Excluding the World Wars, when real rates drop, sometimes deeply into negative territory, one can discern four distinct phases. Up to World War I – mostly the classical gold standard – real rates were comparatively high and stable. In the interwar years, after recovering quickly from World War I, they started to fall markedly in the wake of the Great Depression. Real rates then rose much more gradually starting in the early 1950s and, after a new big dip during the Great Inflation, peaked in the early to mid-1980s, reaching levels broadly similar to those seen in the early part of the sample. Finally, real rates have been declining since then, to historically low levels, wars excepted. Annex Graphs A.2 provide plots of real interest rates for individual countries. – BIS

We next turn to the global perspective. The results in Section 2 have shown that there is an important global component to real interest rates that is correlated with some of the global saving-investment determinants. Here we extend the analysis to include also global monetary factors and compare their importance with the global saving-investment determinants. Our hypothesis is that in a financially integrated world, the role of anchor currencies is important for the dynamics of world interest rates.

As extensively documented, the country acting as global monetary anchor has changed over time. Up to World War I, under the classical gold standard, the United Kingdom played the main anchor role (eg Bloomfield (1959) and De Cecco (1974)). After World War I the United States started to play a similar role, given the abundance of its gold holdings and the United Kingdom’s struggle to adhere to the old parity. The United States then consolidated its unrivalled role in the post-World War II period, starting with the Bretton Woods agreement in 1944. We therefore focus on these two countries.

In addition, the degree of financial integration has evolved substantially over time. As discussed earlier, our sample includes two waves of tighter financial and real integration – the first starting in the latter half of the 19th century and the second starting from the early 1980s. As expected, financial globalisation waves tend to coincide with a higher correlation of real interest rates across countries (Graph 7).  – BIS 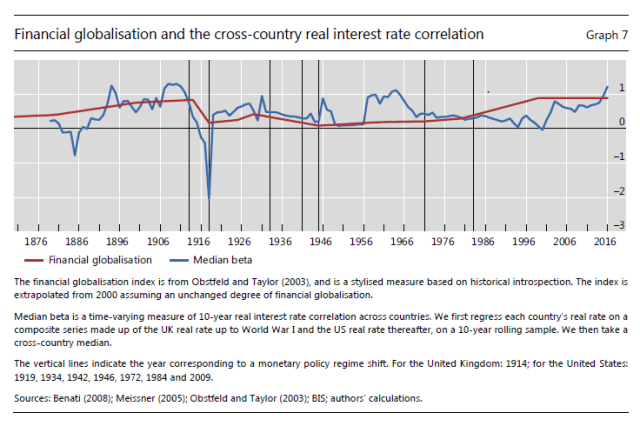 Nowadays the prevailing view among academics and policymakers is that the decline in real interest rates since the early 1980s to historically low peacetime levels reflects a decline in the natural (equilibrium) interest rate. In this view, changes in (ex ante) saving-investment balances have pushed down the real interest rate consistent with full employment (output at potential). The empirical evidence for this hypothesis has so far relied primarily on two approaches. One approach assumes that observed real interest rates roughly track, on average and over long periods, natural rates; it then links their observed decline to potential underlying determinants of saving-investment balances, such as demographic factors or the relative price of capital, mainly through informal inspection or calibrated models. Another approach filters out the natural rate from market rates based on critical assumptions, including the hypothesis that inflation responds stably and systematically to domestic economic slack and that the real interest rate is a key factor influencing aggregate demand.

In this paper we have argued that the role of maintained hypotheses in this type of evidence is uncomfortably strong. Accordingly, we have adopted a more data-driven approach, which links observable proxies for the underlying determinants of saving-investment balances to real interest rates, both market rates and traditional estimates of natural rates. Importantly, we examine the corresponding relationships also beyond the standard recent sample (from the early 1980s), in order to limit the risk of finding spurious relationships. To do so, we go back in history, all the way to the late 1800s, for as many as 19 countries.

Our results cast doubt on the traditional interpretation. While there is a reasonable, although by no means watertight, link between the posited underlying saving-investment determinants and the real interest rate in the recent reference period, the link does not survive beyond the standard sample. By contrast, we find robust evidence of the relevance of monetary policy regimes, defined by the central banks’ interest rate-setting behaviour (reaction function).

There are two ways in which this result, taken at face value, could be interpreted. One is to suggest that the information content of the proxies for the saving-investment determinants may have changed over time for structural reasons. We have not pursued this line of argument. While no doubt possible, it is not immediately obvious to us why that should be the case. Indeed, the unsystematic nature of the instability in the individual saving-investment coefficients would suggest otherwise. Another interpretation is that the maintained hypotheses deserve further investigation. For instance, the link between economic slack and inflation has come under closer scrutiny for some time. And the problem would be compounded if the link between real interest rates and aggregate demand was sometimes unreliable (eg Borio and Hofmann (2017)). Taken together, these factors would raise questions about the theoretical and, above all, practical usefulness of the concept of the natural interest rate for policymaking. These issues clearly deserve further examination.   – BIS

1 Response to Real Interest Rates Not So Real – BIS