Is that Conor Lamb on his Hobie?   By the way,  he will be one of only six millennials in the U.S. Congress.  Fresh.

Not definitive yet and much, much tighter than we thought.  It’s very difficult to model the voter in Appalachia who is a first-time or occasional voter.   In fact, we heard today the Pennsylvania government was flooded with calls from voters across the state asking where their precinct was.   They had to be informed the election was not state-wide and only in one small Congressional district. 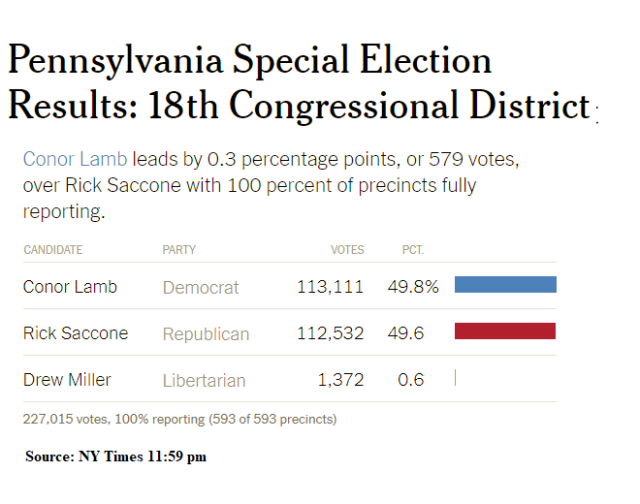 As of midnight,  Lamb has a small lead of around 579 votes with about 1,398 absentee votes still to be counted.  If our data and math are correct, to make up the 579 votes, Saccone would have to win the outstanding absentee vote by about 42 points, or 71 percent to 39 percent.

Very unlikely,  He didn’t win more than 60 percent of vote any of the the four counties.

It will smell very fishy if Lamb loses the final vote tally.

The fact that a Democrat wins in Appalachia is stunning.  Moreover, steel tariffs were just announced,  Trump won the district by 20 points in 2016,  the economy is, supposedly, doing great and the stock market is close to an all-time high, should make a Republican win in Deep Red steel country a slam dunk, no?

Here is the chart from tonight’s elections that will freak out Republicans and White House.

The voters of Pennsylvania have spoken.

Though we are a still divided nation, maybe the Quaker State spoke tonight and desire to Make America Decent Again.  #MADA

See ya’ in November.

This entry was posted in Politics, Uncategorized and tagged Pennsylvania 18th congressional district. Bookmark the permalink.