Really, How Was That Employment Report?

Wow!  That was one hot employment number on Friday, no?   The best ever?

Here’s a tweet from the New York Times today citing a post on the paper’s TheUpshot blog.  President Trump was all over it in his tweetfest today.

The economy is in a sweet spot, with steady growth and broad improvement in the labor market https://t.co/lnbaMQMJn7

Yikes!  Those euphoric headlines signal an economic top to us, they always do.  Furthermore, they are completely absurd.

We perceive the Friday data as “this is about as good as it gets.”

So, really, how good were the numbers?   Relative to what, we ask?

In an absolute sense, the Friday’s jobs data were very good.  They were extra tasty because the report outperformed expectations by 35k nonfarm payroll jobs.  And who wouldn’t like a 3.8 percent unemployment rate?

Relative to the almost eight-year trend of 92 straight months of positive job creation?  Slightly above average. 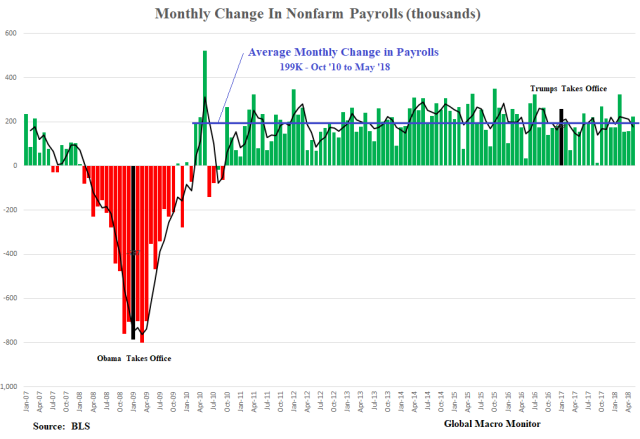 We worry the economy is starting to run up against labor constraints, and our concerns are magnified by the propensity or leanings of this administration to introduce distortions into the economy, such as trade tariffs.   The sweet spot was during a period of more slack in the labor market.

Listen carefully to President’s Trump informal presser after his meeting with the North Korean spy chief on Friday, and you will hear his comparables are almost always relative to previous administrations.  It is the case whether it on the economy or with respect to foreign policy.

Therefore we compare the data in President Trump’s first 16 payroll reports (February 2017 to May 2018) with the last 16 reports of President Obama’s administration  (October 2015 to January 2017).  Our analysis is an extension of last month’s comprehensive post,  Deconstructing The U.S. Jobs Market.

Now we let the data speak.

Even though the economy has grown almost 1 percent faster on an annual basis during the first five quarters under President Trump,  job creation is lower.  The positive is that the labor productivity must be increasing.   However, it may be an indication the economy is also running up against labor constraints.

Job creation during President’ Trump tenure has outperformed in 6 of the 13 private sector industries, most notably in the mining and the manufacturing sector.

Most of the recovery in the mining sector is the result of higher oil prices, and almost all the gains have occurred in support activities for oil and gas operations.   This was the same sector that lost most of the mining jobs during the Obama sample due to an ugly bear market in crude oil.

President Trump’s economy has underperformed with respect to average hourly earnings growth in 9 of the 13 private sector industry groups.  Wage growth in financial activities has significantly outperformed under Trump and all other sectors.   The populist tension between Wall Street and Main Street continues.

There has been de minimis job creation in the poster children of manufacturing, such as the steel industry, and actual job losses in the auto industry.

Note also the 20k increase in oil and gas machinery, which reflects a further boost to job creation of high oil prices.

However, a higher oil price is a zero-sum game as it reduces employment in other sectors, primarily related to the consumer, as real incomes decline.  We estimate the average driver will pay an additional $400 per year for gas if prices remain up here, which consumes almost of the net income gain from the tax cuts.

Who Is Getting A Raise?

The following table illustrates the average hourly earnings increase in various industry groups.  Portfolio managers and their entourage are happy as are bricklayers, construction workers, truck drivers and plumbers who are experiencing robust wage growth.

The 5 percent average hourly earnings growth at general merchandise stores, such as WalMart,  the largest private sector employer in many states, corresponds with a 12.4k loss in jobs at warehouse clubs and supercenters (see above table).  This either indicates a very tight labor market,  the impact of minimum wage increases,  social and political pressures on wages, technology, and the Amazon effect, or all of the above.

The auto worker continues to get hammered.  It could be one reason why President Trump is taking such a hard line in the NAFTA negotiations, and an indicator that compromise is not going to be an option.

Finally, we take a quick look at the macroeconomic impact of the tax cut.

Thus far, it is mixed, and hardly lives up to the hype we see some in administration touting.  It is still early in the game, however.

This entry was posted in Employment, Uncategorized and tagged employment, Jobs, Unemployment, Wages. Bookmark the permalink.

18 Responses to Really, How Was That Employment Report?