The machine learning random forest algo predicts Spain is favored over Germany mainly due to the fact that Germany has a comparatively high chance to drop out in the round-of-sixteen.

Combining the odds from many different bookmakers puts Brazil as the clear favorite to win the 2018 World Cup, with a probability of 16.6 percent, followed by Germany (12.8 percent) and Spain (12.5 percent).

MIT reports there is a better way to predict the 2018 World Cup winner,

But in recent years, researchers have developed machine-learning techniques that have the potential to outperform conventional statistical approaches. What do these new techniques predict as the likely outcome of the 2018 World Cup?

…a combination of machine learning and conventional statistics, a method called a random-forest approach, to identify a different most likely winner.

First some background. The random-forest technique has emerged in recent years as a powerful way to analyze large data sets while avoiding some of the pitfalls of other data-mining methods. It is based on the idea that some future event can be determined by a decision tree in which an outcome is calculated at each branch by reference to a set of training data.

…The predictions arrived at through this process differ from others in some important ways. For a start, the random-forest method picks out Spain as the most likely winner, with a probability of 17.8 percent.

…a big factor in this prediction is the structure of the tournament itself. If Germany clears the group phase of the competition, it is more likely to face strong opposition in the 16-team knockout phase. Because of this, the random-forest method calculates Germany’s chances of reaching the quarter-finals as 58 percent. By contrast, Spain is unlikely to face strong opposition in the final 16 and so has a 73 percent chance of reaching the quarter-finals.

If both make the quarter-finals, they have a more or less equal chance of winning. “Spain is slightly favored over Germany mainly due to the fact that Germany has a comparatively high chance to drop out in the round-of-sixteen,” say Groll and co.  – MIT Technology Review 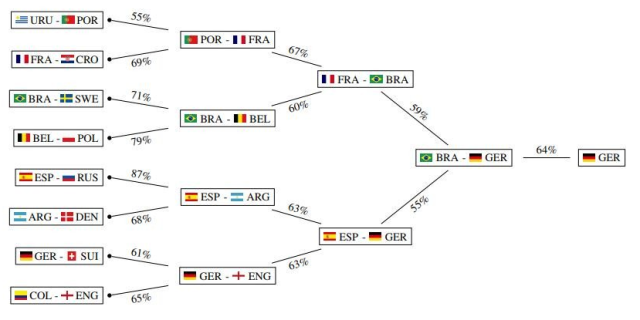 There you have it, folks, the machines predict Spain or Germany while the bookies bet on Brazil.   Make sure to read the entire article on how machine learning makes it prediction, it is well worth your time.  See here.