I was fortunate to work with the Bush #41 administration in developing and implementing their plan to resolve the 1980/90’s developing country (emerging markets in today’s parlance) debt crisis — The Brady Plan — named for his Treasury Secretary.  Can you imagine today’s inhabitant of the White House allowing, say,  Secretary Mnuchin to take credit for one of the administration’s signature policy triumphs?

President Bush always had a goal and a plan, which was always bathed in humility.   No victory laps, no dancing on the Russians’ grave after communism fell.

All, severely lacking and a stark contrast to today’s political leaders.

The Fall Of Communism

I also was hired by the Polish government shortly after the communists fell as an economic and financial advisor to help the country restructure its debt and economy.  My colleague and I had dinner one night with an administration official at a restaurant in Paris, which was once the childhood home/palace of Louis XIV.

The U.S. official conveyed to us the firm resolve of the Bush administration that it would not let Poland fail in their transition from communism to a market economy.   They wanted to make Poland an example of a successful transition that the ex-Soviets/Russians could see and emulate.  Poland became one of the superstar emerging economies over the next two decades.

Where Were The Europeans?

I was always perplexed where were the Europeans on the Poland issue?  The German bankers, for example, were obsessed with one thing, getting their loans repaid with the smallest haircut possible, as they should have been.  But why was the U.S. government the one leaning on the banks, including some of the largest in the U.S., to grant Poland a 50 percent debt haircut?   Global leadership, that’s why.

The Europeans were not happy with the Bush administration over their hardball tactics in dealing with Poland’s private and Paris Club creditors.

Later, I found out the Poles, who were essentially broke, were being subsidized by the U.S. Treasury and my fees were effectively being paid by the American government, err the    Japanese bondholders.

One of my best undergraduate college buddies, Malek, was from Kuwait.  He told me that when Sadaam invaded in 1990,  Sadaam’s brother, who led the invasion, set up headquarters in the house in front of his.   Malek would rail against the Palestinians, many of whom were guest workers in Kuwait at the time because they sided with the Iraqis during the invasion.  So much International Arab Brotherhood.

I called Malak a few years after the Gulf War who couldn’t talk as he was running out to celebrate the national holiday, “Festival of Gratitude,”  in honor of George Herbert Walker Bush.

The celebration began as soon as a chartered blue and white Kuwaiti Airways jetliner landed, bringing the former President, his wife, Barbara, and other guests on his first visit to Kuwait.

The thousands lining the highway from the airport to the city included schoolchildren who were given a holiday for the occasion. Many waved small United States flags or balloons and others held signs.  – NY Times

A few years later, my wife and attended a Saturday Night Live performance.   Here was the opening monologue. 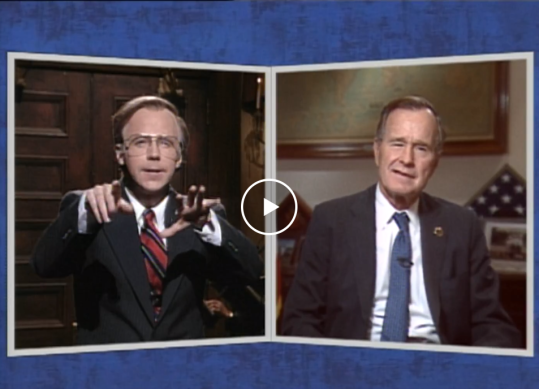 President Bush was also well connected to the golf world.  He and #43 take a middle name from their maternal grandfather,  George Herbert Walker, of the Walker Cup fame.  His grandfather once had to suspend golfing legend, Bobby Jones, for throwing a club and wounding a female spectator, telling Jones, “You will never play in a USGA event unless you can control your temper.”

His golf pedigree can be found in his name. George Herbert Walker was his maternal grandfather, a former president of the United States Golf Association, who was instrumental in the founding of the biennial amateur competition that bears his name, the Walker Cup. Bush’s father, Prescott Bush, was also a former USGA president and a scratch golfer who impressed upon his son the importance of playing golf at a fast pace.  – Golf World

President Bush proclaimed he was taught to play golf the proper way.  He would often brag about his course record at Cape Arundel Golf Club in Kennebunkport, Maine. Was it a 63 or 64?   “An hour and 20 minutes,”  #41 would say.

Sure, like all presidents, you made some mistakes.  Nevertheless, we expect you’ll be among, or close to,  the Top 10 before we see you on the other side.

Thank you for your service and sacrifice.

This entry was posted in Politics, Uncategorized and tagged President George H.W. Bush. Bookmark the permalink.