BFTP: Pass The NorKo, My Back Aches 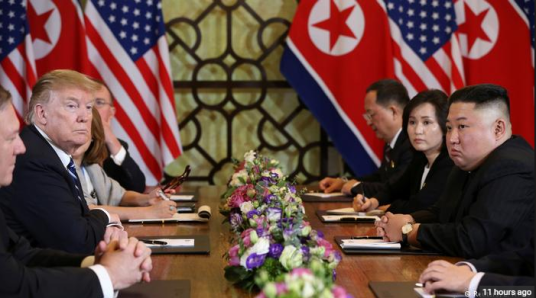 As POTUS travels back to the States after his meeting with the North Korean leader, we are reposting a piece we wrote last April.  We were kind of lone rangers and took some wrath as almost everyone was lathered up about a North Korean peace deal and chants of “Nobel Peace Prize!” were ubiquitous at Trump rallies.

Our quick analysis of the recent summit is that both leaders badly misjudged each other leading up to Vietnam summit.  Trump, in his chummy relationship with Kim, and Kim, probably receiving bad advice from China and Russia that Trump was desperate for a “win” and was willing to give away the store.

A Signal To China?

Could Trump be sending a signal to President Xi?  A signal “not so fast” on a China-U.S. trade deal?  That is he’s not going to roll over that easy?

The market has not priced what we call a “Mad King” risk premium, where POTUS abruptly “walks” from what was a done deal after being accused of being weak by his right flank, similar to what triggered the government shutdown.

You know our view that North Korea is just a pawn in the bigger geopolitical power struggle between the U.S. and a rising China with Russia playing her bit part.

Our conclusion back then (last April)?

George W. doesn’t have a Nobel Peace Prize that we know of.

We have always believed talking to adversaries is always a good thing.  Kudos to POTUS for doing so.

Making love?  Not so much.  The complications of our diplomatic “one-night stand” and “foreign affair” with Kim the Young-un now begins.

“Deja Vu All Over Again” In Korea

· Cautious welcome by Bush for road map deal
· Aid and US promise not to invade seals agreement
.
North Korea has agreed in principle to end its nuclear weapons programme and rejoin the international non-proliferation treaty, marking the biggest breakthrough in its three-year stand-off with the US.
.
Under a draft accord issued by North Korea and five other countries in Beijing yesterday, the reclusive state promised to give up its main bargaining chip in return for energy, economic aid and a US promise not to attack.  – The Guardian,  Sept 19, 2005

Kim Prepared to Cede Nuclear Weapons if U.S. Pledges Not to Invade

SEOUL, South Korea — North Korea’s leader, Kim Jong Un, told President Moon Jae-in of South Korea when they met that he would abandon his nuclear weapons if the United States would agree to formally end the Korean War and promise that it would not invade his country, a South Korean government spokesman said Sunday.

In a faith-building gesture ahead of a summit meeting with President Trump, Mr. Kim also said he would invite experts and journalists from South Korea and the United States to watch the shutdown next month of his country’s only known underground nuclear test site.  – NY Times, April 29, 2018

How do you know that the North Korean regime is lying? Answer: Their lips are moving. – National Security Adviser John Bolton

George W. doesn’t have a Nobel Peace Prize that we know of.

We also hope it is not an all or nothing negotiation with Trump and Kim.  The environment seems ripe to make the world safer and the lives better for the Koreans even if it just incremental and without achieving total victory as the administration sees it.

1 Response to BFTP: Pass The NorKo, My Back Aches