Wow!   We are still digesting the full redacted version of the Mueller Report.

We only had to get through the first few pages within an hour of its release on Thursday for us to conclude the House Democrats will have no choice but to move on Impeachment.   See our post, Impeachment Market – The Only Market That Matters Now here.

If we could make any investment right now, it would be the media that takes the report and runs with it.  Books, movies, conspiracy theories, and others will use the Mueller Report as the original source for the next 50 years, and beyond.   The Mueller Report reads like a Tom Clancy novel and makes the Bridge of Spies look like a Flintstones cartoon.

We find it interesting that most cannot abstract themselves from the heat of the political moment to recognize the historical importance and consequences of this document.  It is the classic case of the boiling frog fable.

We have pulled just a few money quotes from the first few pages, which we believe will resonate throughout history.   Don’t use it as an excuse not to read the entire report.

Keep an open mind and stay flexible.   Read the full report for yourself and do not depend on the spin from either side.

Hollywood can’t make this stuff up.

See the full redacted version of the Mueller Report here. 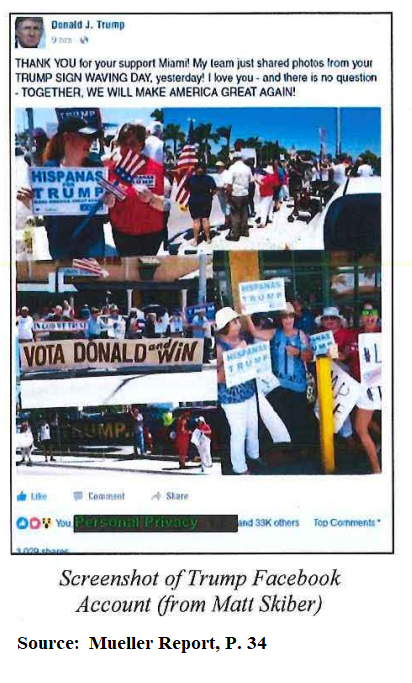 This entry was posted in Politics, President Trump, Uncategorized and tagged Mueller Report. Bookmark the permalink.